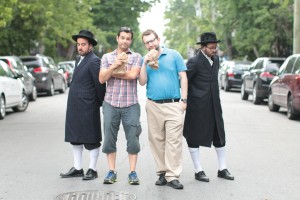 It’s Yom Kippur, and Chaimie, a defiant secular Jew is seated in Montreal’s famed La Banquise restaurant enjoying an authentic French Canadian specialty known as poutine – French-fried potatoes covered with melted cheddar cheese and meat gravy. Along comes his pal Leizer on his way back from synagogue in suit and tie. Leizer castigates Chaimie for violating the ritual fast. The dialogue between the two 30-something Canadians is completely in Yiddish.

This is how an episode of the Internet comedy series YidLife Crisis (www.yidlifecrisis.com) begins. To merely mention that Leizer eventually agrees to break the fast and eat some poutine – after insisting that the gravy is served on the side so he won’t have to eat meat and milk together ‒ won’t stop you from laughing out loud unstoppably if you haven’t yet seen the sketch.

The above plot summary also doesn’t give a true sense of what the series is really about. Not unless one also points out that in between laughs the comedy duo debate the existence of God and confront each other’s hypocrisy and narrow-minded views of Judaism. Yet, no matter how contentiously they disagree with each other, they never lose their sense of brotherhood, of being partners in hevruta, the traditional way in which Jewish texts are studied in pairs.

“In the word hevruta, you have the origin of the Yiddish word hevraman, which is much more than just a friend, it’s more like a buddy,” says Eli Batalion, who plays the role of Leizer. “What Jamie Elman (who plays Chaimie) and I are doing is a kind of hevraman’s hevruta, the informal street debate that Jews like us who grew up in Montreal have all the time, “ he says, and after pausing adds, “Just in a more schmutzadik way.”

There certainly is no shortage of schmutzadik (dirty) material in the YidLife Crisis repertoire. They compare pastrami sandwiches to naked women; yield to the sexual temptations of a missionary temptress in a bathroom; and aren’t afraid to freely associate leather phylactery straps with S&M bondage practices.

They may only be partially tongue-in-cheek when they precede their programs with the disclaimer: Rated Chai+ (18 and over).

All of this, however, is done in the context of social satire that is reminiscent of the early writings of  Philip Roth, who in the 1950s and 1960s, unabashedly raised issues about intolerance and snobbishness among Jews at a time when other Jewish writers and humorists were afraid to openly critique Jewish characters.

“We decided to make a point of speaking Yiddish and to talk about things that are Jewish,” Elman tells The Jerusalem Report, explaining the raison d’etre of the series the two founded three years ago. They were classmates at Montreal’s Bialik High School, one of the few Jewish schools in North America that still taught Yiddish when they were growing up in the 1990s  (it has since stopped doing so). After graduating, the two close friends stayed in touch as Elman pursued an acting career in Hollywood and Batalion made films in Canada.

“We always wanted to work together, and finally we came up with the idea for YidLife Crisis,” says Batalion, pointing out that they have been influenced by a wide range of Jewish comedians, from Lenny Bruce and Woody Allen to Jerry Seinfeld, who usually deal with Jewish topics in a less direct way.

“We feel we can say anything we want and make things that were subtext (for other comedians), the text,” says Elman. He points out that some observers have credited them with bringing Jewish comedy full circle back to the vaudeville era when Yiddish theater was filled with Jewish characters.

When asked why the two decided to do their shows in Yiddish, a language that is neither their mother tongue nor that of most of their audience, Elman points out that it is a language that both sounds funny and has a lot of meaning for them. “Yiddish is a lot more than just funny. It contains a whole culture and history and anthropology of the Jewish people.”

But Elman emphasizes that the Yiddish language itself is not what distinguishes their work. “Yiddish is the lens through which we see the world. The YidLife Crisis series is really more about the ‘crisis,’ with Yiddish helping to illuminate that crisis.”

What then is the crisis?

“It’s a Jewish identity crisis and at a higher level an identity crisis which comes from the fact that we are all bastards,” explains Batalion. “We live in a multicultural world in which various cultures rub up against each other. We are all a bit Yid-ish, a bit French-ish, English, goy-ish. It really just depends on the context. For example, we just came from Poland where the things that many people think are Jewish, like latkes or halla, are really Polish. They did it first.”

“So the ‘crisis’ is that people cling to these identities in ridiculous and dogmatic ways that cause tensions, wars and genocide,” says Elman. “All of which, I would say, is a crisis.”

Now that the older generation of European-born Jews that spoke Yiddish is rapidly disappearing, it is perhaps ironic that Canadian-born Jews like Batalion and Elman are resurrecting the language their parents or grandparents may have used to speak when they wanted to say something they didn’t want young children to understand.

Yet, Elman sees this as a fitting twist. “Why were parents speaking Yiddish?” he asks. “It’s because they were telling secrets which were really the truth. ‘Go to bed children because your mother and I want to…’ So we like the idea that our characters speak the truth.

“It’s sort of like when you are at a formal party and somebody is talking to you and you are nodding and smiling back at them,” adds Batalion. “But in your head you are really saying in Yiddish, who is this schmuck?”

Elman continues: “What we are doing is not exclusive to Yiddish and our show is not about Judaism,” continues Elman. “It’s about all religions, all cultures, all identities. It’s not just the Jews who suddenly switch into a mystical language. I have Italian friends who switch into Italian when they want to say certain things. It’s a natural thing to do. It’s where the emotion comes in and the truth comes out.”

Elman points out that the series has struck a chord among many non-Jewish audience, with all programs also offered with French sub-titles to cater to their strong following among the  French-Canadian population of their native Quebec. “They too have an identity crisis,” he says.

After  two seasons of fully scripted dramatized comedies, Elman and Batalion during the past summer decided to take the show on the road and do a series of documentaries in New York, Krakow and Israel.

“When you are dealing with Jewish subjects, Israel is the elephant in the room,” says Elman. “Because it’s so hotly debated, it’s inevitable that we deal with it.”

From a preview of the documentaries they compiled in Israel, (to be launched on-line on Feb.25) it is clear that they are easing into the subject. As they visit one of the world’s last remaining Yiddish bookstores in Tel Aviv’s central bus station, kiss the mezuza on the door of a Tel Aviv sex shop, and devour portions of kishka (stuffed intestine) in a suggestive manner at Sender’s traditional eatery in South Tel Aviv, their banter continues to be in their trademark style ‒ irreverent, mischievous and thought-provoking.

However, even when they chat up a Chabadnik who guides them in putting on tefilin against the backdrop of the Tel Aviv Gay Parade, they sidestep the social and political issues that are truly divisive.

For the moment, Batalion suggests, they are content with getting people outside Israel to become better acquainted with what life in Israel is like. “Most people don’t know that in the Middle East you have a place where 200,000 gays can walk freely in a parade on the street,” observes Batalion. “What I find fascinating, and by that I mean absurd, is that you have LGBT groups that specifically want to focus on boycotting Israel.”

Elman, noting that the two appeared at the Comedy for Change conference in Jerusalem last year, points out that they expect to eventually produce programs that “make fun of the extremists on both sides.”

“We are anti-extremist and we believe that hyperbole does not promote peace. But comedy can facilitate conversation between factions,” he says.

Batalion and Elman hope to produce their next season of programs with larger production budgets, and possibly move from the web to a tv network. They have been nominated for the 2016 Canadian Screen Awards and are attracting leading Hollywood actors to appear in their programs. Their most recent effort features Mayim Bialik, the star of CBS’s The Big Bang Theory, in a parody on Jewish matchmaking.

Until now, they have been very much a two-man team, writing, producing and directing on their own. “Most of our day is spent asking people for favors,” quips Batalion, noting that they get a lot of help from old high school friends like co-producer Philip Kalin-Hajdu and Yiddish coach Rivka Augenfeld.

“We get professional support from people from a wide variety of backgrounds,” adds Elman, pointing out that their editors ‒ Gadi Mozes, Alain Omer Duranceau, Mark Bendit ‒ range from “Israeli to proud French-Canadian atheist to Quebecois Separatist,  all of whom line up  with us philosophically.”

Financial support has come from a wide variety of Jewish philanthropies, including the Jewish Community Foundation of Montreal and the Natan, Schusterman and Bronfman family foundations.

“They believe that this is the future of Jewish renewal, bringing people to become engaged (with Jewish issues),” says Elman. “But we’re not trying to make people more religious. If our programs were a dvar torah, they wouldn’t be emailed and the viral videos that they have become. People wouldn’t be getting behind our shtick.”

“Or under our shtick,” adds Batalion.