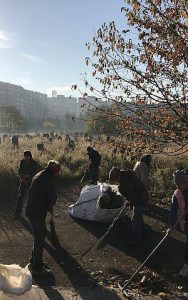 An unlikely group of more than a hundred people came to clean up  the Jewish cemetery in the western Ukrainian town of  Kalush in mid-October.  There were local high school students,  about a dozen American Peace Corps volunteers,  and municipal office workers given the day off work by Mayor  Ihor Matviychuk. Only a handful of the participants were Jewish.

This picture of  harmonious Ukrainian-Jewish  relations  may seem surprising  as it runs counter to  the stereotype of anti-Semitism that taints  many press stories about present-day Ukraine.  But it just may be the forerunner of larger things to come.

One of the initiators of the clean-up was the principal of the high school that faces the cemetery. 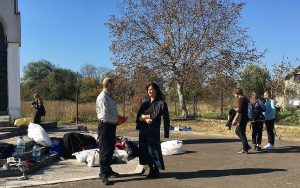 “When I became principal three years ago, I felt a big sense of responsibility to do something about the neglected condition of the cemetery,” says Oksana Tabachuk, 49, the principal of the Kalush Gymnasium.” My family has been in Kalush since the seventeenth century  and I know that the Jewish community was also here for many generations,” she says, adding a an emotional reminiscence told to her by her mother who was a child during the war.  “She used to shudder as she described climbing the wall surrounding the cemetery and witnessing the ground moving for hours and hours after the Nazis shot Jews there.”

The cemetery wall has long since eroded and it is the lack of a protective barrier that  Tabachuk blames for a swastika being sprayed on a monument there last spring. “That act of vandalism was  not typical of Kalush people but it’s what happens when  some people go too far in their beliefs and misinterpret the  idea of nationalism,” she  explains. She notes that one of the teachers who rushed to paint over the swastika was Natalia Zubrytska, the granddaughter of a Ukrainian couple recognized by Yad Vashem as Righteous Gentiles for saving Jews during the Holocaust. 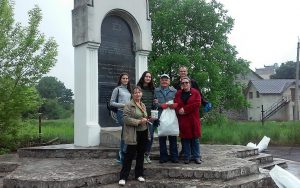 Prior to WW II, Kalush was a flourishing trading center in the hub of Poland’s Galicia region. Its prosperity was boosted by salt mines and the cross-pollination of business that came from a multi-cultural mix of Poles, Ukrainians and Jews; a pre-war population of  15,000, comprising almost equal numbers of each group.

The extermination of the Jewish community began in the summer of 1941 when the Nazis marched about 300 members of the Jewish intelligentsia outside the town and shot them in a forest.

Ironically, it was a visit by two American Peace Corps volunteers to the forest where the unmarked mass killing took place that eventually led to the citywide effort to take care of the Kalush Jewish cemetery. 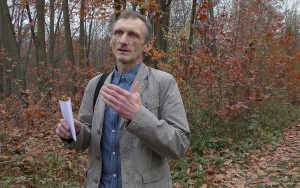 “I was very touched by the trip to the forest that city historian Bohdan Yanevych took me and fellow Peace Corps volunteer Brennan Purtzer on,” recalls Deignan. “It seemed sad that there was no commemoration of the spot. We thought that if people from abroad started to visit the site, it would provide an incentive to build a memorial.” 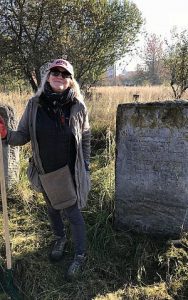 It also occurred to Deignan that increasing awareness of the city’s tragic history might mesh together with one of her main goals  as  a business development advisor to the Kalush City Council: to promote tourism to the city.

Deignan’s search for other sites that might interest Jewish tourists led her to the Kalush Jewish cemetery, where she became intrigued by the sculpted headstones, which date back centuries.

When Deignan found out that the only care the cemetery received was from the Kalush Gymnasium,   she and  her city hall colleagues came up with the idea of an official city-sponsored event.

But at first there was some resistance.  As the educational curriculum mandated in Kyiv makes no mention of Jewish communities anywhere in Ukraine, some young residents were unaware that the city  had ever  had a Jewish population and  saw no need to get involved. Others  suggested that the cemetery upkeep should be paid for “by the descendants of the people buried there.”

But Deignan, 57, who formerly worked in the San Jose Attorney’s Office in California, put her skills in navigating bureaucracies  to work and together with her colleagues negotiated a compromise: the city would proclaim a Day of Action devoted to cleaning both the Jewish and an old Ukrainian cemetery. City workers who did so would be given the day off work.

News of the event spread widely through social media and the local press.

Many  other Peace Corps volunteers stationed in  western Ukraine also joined in; there are about 300 volunteers working throughout Ukraine in an effort to shore up democratic values in a country that borders on Russia.

During the weekend that the Day of Action took place, it was another event that occurred in Ukraine which caught the attention of the  Jewish press:  on October 14 Ukrainian nationalists marched in Kyiv  to commemorate the 76th anniversary of the founding of the  Ukrainian Insurgent Army (UPA). UPA is viewed in a heroic light by Ukrainians today because it  fought  for Ukrainian independence from the Soviet Union. But as Holocaust historians have noted,  UPA was   one of the wartime militias involved  in violence against Jews.

Some local Jewish observers suggest however,  that the present day glorification has more to do with anti-Russian feelings than anti-Semitism.

“There was a change in their ideology after 1943,” explains Yuri Radchenko, a historian who teaches at Kharkiv University  and who has held research positions at the U.S.  Holocaust Memorial Museum.  “After 1943, Stepan Bandera, their political leader, tried to remove the anti-Semitic element of their ideology,” says Radchenko, pointing out that until then a commonly used slogan was ‘Kill the Bolshevik Jew”.  Radchenko notes that   present-day Ukrainian nationalists try  to  “rebrand Bandera as a kind of liberal democrat”.  Even if historically incorrect, says Radchenko, this  rebranding does perhaps indicate that the nationalist marches do not in themselves  signify an anti-Semitic message.

Radchenko, points out that he regularly wears a kippah when  he goes back and forth to synagogue services in Kyiv. He also notes that his ongoing research on the  subject of the militias  is an indication that Ukrainian researchers  are not hampered by a 2015 Ukrainian law criminalizing rhetoric critical of the anti-communist Ukrainian partisans.

Radchenko’s sanguine depiction of present-day Ukrainian sentiments is borne out by  statistics compiled by the Ukrainian National Minority Rights Monitoring Group, an organization similar to the ADL in the U.S.

“There actually has been a decline in anti-Semitic incidents in recent years,” observes Vyacheslav Likhachev, who is one of the authors of the report.  The 2017 report provides detailed descriptions  of a total of 25 anti-Semitic incidents reported that year — almost all comprising acts of vandalism. “Since 2016 there have been  no reports of violence against people,”  says Likhachev, who previously worked as a guide at Yad Vashem.

Likhachev however does feel that the country has not adequately addressed all aspects of its World War Two history. “The  existential threat posed by the Russians today keeps the society from having a proper reflection of its  own past, ” he observes.

One Kalush resident who is not reluctant to reflect  about the past is Arthur Yefremov, 28, the director of the Kalush City Museum.  Yefremov recently curated an exhibit on Jewish rituals and is well aware that the museum is situated in a building that served as  a prewar Jewish community center. “To try to conceal the history of this building would be like creating a kind of  ‘fake history’ ,” says Yefremov. “In World War Two not only did Kalush lose its Jewish community, it also lost a good part of its history. It’s time we did something about that.” 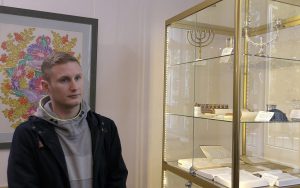 Yefremov feels that his generation simply needs to learn the facts. “We cannot be held responsible for the deeds or misdeeds of our grandparents or great-grandparents,” he comments.

One month after the Day of Action, Patricia Deignan returned to the Kalush Jewish Cemetery with a group of visiting Jewish descendants of the region. During their visit, the delegation was warmly received by  city officials with whom they discussed plans to develop a Jewish heritage tourism program.

As the delegation arrived at the graveyard, the headstones cleared in October glowed handsomely in the golden morning light. One delegation member, Marla Raucher Osborn, who has led efforts to restore the Jewish cemetery in Rohatyn, noted that it was remarkable that the Kalush headstones were still standing in their places,  unlike in other places where  headstones have been stolen and used as pavement.

The Kalush headstones may be exceptional in one other way: in the impact they are having on the youngsters looking after them. 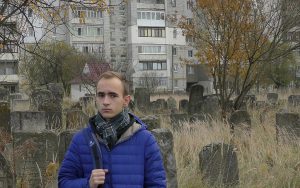 “Every day when I saw the cemetery on the way to school, I kept thinking that something that old needs to be taken care of,’’ said Yura Gulivatyy, 16, who was one of the clean-up’s student leaders. “When we finally did something about it, it gave me  a great feeling of kaif,” mused Gulivatyy,  using the teenage Ukrainian slang word for euphoria. “We are living in the twenty-first century,  in a period of globalism when it’s important for different people to get closer to one another,” he added.