giving sight to the blind 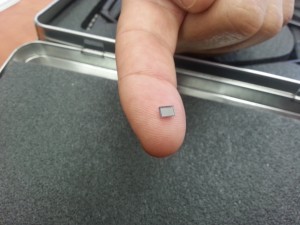 One of Efi Cohen Arazi’s strongest childhood memories is looking after his blind grandmother is.  “I remember how hard it was for her to be totally dependent on someone else to get her a drink or move around our home,” recalls Cohen Arazi, noting that it was only in his grandmother’s elderly years that she lost her eyesight. The reason for her blindness was age-related macular degeneration (AMD), a disease that every year damages the vision of an estimated 200,000 people in the U.S. alone.

Nano Retina, a startup co-founded by Cohen Arazi in 2009,  has developed a technology that promises to restore eyesight to AMD and other visually impaired patients. “We expect the first patient to be implanted with our product in 2016,” says Cohen Arazi, noting that the assembly of the product began in early March at a semiconductor manufacturing facility in northern Israel.

The Nano Retina technology looks and works like a bionic body part in a science fiction movie. It consists  of a tiny microchip that is implanted into the eye;  and it is powered by wireless electrical energy transmitted from a battery in an accompanying pair of glasses worn by the patient. The microchip is  about one quarter of the size of a postage stamp and  operates like a miniature camera converting light images into neural messages. The brain decodes  the neural signals with a visual clarity of about  600 pixels, a quality similar to that of some  early stage digital cameras. The quality is expected to reach 2000 pixels in the second-generation version.

“Inserting the chip into the eye only requires a relatively simple 20 minute operation,” says Cohen Arazi, holding a sample of the tiny product  on the tip of his finger. He then puts on the accompanying  glasses and sums up the product’s impact. “It allows people to become independent again.”

As the proprietary technology developed by NanoRetina enables disrupted nerves to communicate with each other again, the company is exploring other applications including spinal repair.

The financial side of the Nano Retina story is in many ways just as interesting as the technological one. The company is backed by American, Israeli and Chinese investors.

The main Israeli investor is Rainbow Medical, an investment and management company that has founded 12 medical device companies since it was founded in 2008 by Cohen Arazi together with two iconic figures of the Israeli business scene, Leon Recanati, scion of an Israeli banking dynasty and the head of GlenRock Israel,  and Yossi Gross, a serial medical device entrepreneur.  Prior to becoming the CEO of Rainbow Medical, Cohen Arazi had served in senior management positions in Israeli, Swiss and American healthcare companies, including a stint as VP at California-based Amgen, one of the largest biotech companies in the world.

The American investor  and co-founder is Jim Von Ehr, a nanotechnology expert and the founder of Texas-based Zyvex Labs.  “Yossi and I met Jim at a conference in Dallas where  he gave us  a tour of his R&D facilities,” recalls Cohen Arazi. “After we saw the unique potential of his nanotechnology platform, we put off our flight back to Israel and stayed on in Dallas to work with him on the Nano Retina concept.”

The Chinese investor in NanoRetina is the Ping An insurance company, a huge enterprise employing 600,000 workers and managing more than $500 billion in assets.  Ping An’s investment came as the result of years of efforts by Cohen Arazi to find ways to collaborate with China.

He points out that there is an excellent strategic fit between Israel and China in the area of medical device technology.

“They have a rapidly growing market, which includes a rapidly-expanding middle class that already exceeds 300 million people, “he observes, adding that the Chinese government has committed $70 billion to healthcare development in its  current 5-year economic plan.

On the Israeli side, he notes that the Chinese hold Israeli technology and culture in high esteem. “But in order to work with them you have to be there,” he says, explaining that he has made numerous trips to China and worked hard to get to know their way of life.

When asked if he is concerned about Israeli products being illegally copied, he points out that NanoRetina and other technologies in the Rainbow Medical portfolio are all “super complex and technologically very challenging.”

In addition, he points out that Rainbow Medical continues to keep control of its assets. Unlike the recent controversial Israel-China deal in which a Chinese company acquired 75 percent ownership of Tnuva, Israel’s flagship dairy company, Ping An remains a minority Nano Retina shareholder .

For Rainbow Medical, the Chinese investment in Nano Retina also represented a turning point in Rainbow Medical’s collaborations with China. Since then Chinese investors have taken a stake in another  portfolio company Gluesense, the developer of an implant for monitoring diabetes conditions.

“An unwanted outcome of the Western influence on China, has been a shift towards eating more wheat products and fried foods such as doughnuts,” observes Cohen Arazi. “Consequently, the upsurge in diabetes.”

But the most significant development has been a  recent $25 million investment by Chinese investors in Rainbow Medical itself, aimed at helping Rainbow nurture existing and new portfolio companies. In addition to Ping An, other Chinese investors include ZTE, the Chinese telecommunications giant, a major Chinese financial management company and several Chinese venture capital funds.

“The Chinese are eager to diversify their investments and see Israel as an attractive place,” says Cohen Arazi, adding that Rainbow has opened a full-time office in Shanghai headed by a local Chinese national.

The $25 million investment in Rainbow Medical came just a few weeks ahead of the BrainTech Conference held in Tel Aviv in mid-March. There were many young Israeli inventors and would-be entrepreneurs in the audience when Cohen Arazi outlined Rainbow Medical’s plans.

“There are a lot of bright Israeli scientists out there with ideas worthy of commercialization,” says Cohen Arazi. With Rainbow Medical’s  model of low-cost and innovative Israeli R&D being combined with  investment capital from all over the world, it’s clear that  the company can be expected to establish many new startups in the days to come.

Sidebar 1: In the Right Place At The Right Time

Ingrid Ye was in the right place at the right time. At a time when many young Chinese professionals set their eyes on America or Europe to broaden their experience, Ye decided in 2012 to pursue an MBA at Tel Aviv University. “I had just read the Start-Up Nation book about Israel and I thought that coming to Israel might provide me with opportunities in a place uncrowded with Chinese,” she tells The Jerusalem Report. While studying at TAU, she met the managers of Rainbow Medical just as the Israeli firm was  looking for someone familiar with Chinese culture to facilitate collaborations.  She began to work for Rainbow and today heads the Israeli company’s office in Shanghai. “Until a few years ago, there was not much activity between Chinese and Israelis in the medical device sector, but now there are delegations coming and going between the two countries all the time,” she observes. She points out that one of the challenges of her job is getting Chinese companies to make their first investment in Israel. “They have been investing in American and European companies for quite awhile, but once they see that working here is actually quite safe they are able to see the potential of Israeli innovation.” She notes that by supporting Israeli R&D the Chinese investors expect to be able to help bring products to large international markets. “For the Israeli industry this will lead to the creation of more jobs as Israeli professionals support international marketing and distribution efforts.”

Turning Israel  into a worldwide brain technology hub is the latest idea launched by Israel’s former president and serial visionary, Shimon Peres. “We want to go from being the Startup Nation to being the Brain Nation,” said Peres at the Israel Brain Technologies conference in Tel Aviv in March. Conference Chairman Dr. Rafi Gidron pointed out that more than 100 Israeli companies currently have technologies in development or use for brain-related conditions. Among them: Lifegraph which uses smartphones for monitoring the condition of psychiatric patients, NINISpeech, developer of a device for helping stutterers improve their speaking fluency, and Myndlift, which uses neuro-feedback to help ADHD (Attention Deficit Disorder and Hyperactivity Disorder) patients improve their concentration.