A filmmaker documents the plight of Eritrean refugees held hostage in the Sinai. The Jerusalem Report May 2014  PDF: The Sound of Torture 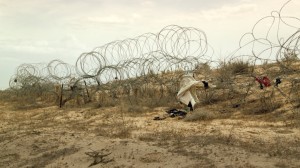 There are about 8,000 survivors of the Bedouin torture camps in Israel today

When Meron Estefanos arrives outside a cluster of Bedouin houses in the Sinai desert, she knows that in the basements of the well-built two-story buildings kidnapped Eritrean refugees are chained to the ground.  She has spoken to them on the phone and heard the men scream while being tortured with burning coals. She has heard the women weep over   being repeatedly raped.  And from talking to the kidnappers themselves, she knows that they will kill these hostages, as they have done to others in the past, unless they are paid a $25,000 ransom fee or more for each hostage.

Disguised as a Bedouin woman, Estefanos is wearing a black robe with a niqab covering her face. Were this a Hollywood movie, she undoubtedly would find a way to burst into the premises and rescue the hostages.

But this is just a scene in a documentary film telling a true story. And sadly, Estefanos, a Swedish-Eritrean radio reporter, can merely observe the location from a car window. When someone comes out of the buildings and starts to approach the car, Estefanos, afraid that she will be discovered and attacked, tells her camera operator to hide the camera and they quickly drive away.  Like everyone else who has tried until now, Estefanos is unable to put a stop to one of the cruelest ordeals going on anywhere in the world today.

The people subjected to these atrocities are Eritrean refugees who have fled their destitute country in the hope of finding a better life in Israel but end up as captives in the Sinai. Until now the torment that many undergo en route has received scant media attention. Their story is told in heart-wrenching detail for the first time by Israeli filmmaker Keren Shayo in her shocking feature-length documentary “Sound of Torture” that has its Israeli premiere at Tel Aviv’s Doc Aviv Film Festival in May.

The origin of the kidnapping problem goes back  to 2006 when European countries decided to seal their borders to Eritreans fleeing the repressive rule of President Isaias Afwerki, the country’s dictator who mandated military service for everyone aged 18-55.  With the sea route to Europe closed, the Eritreans changed their destination to Israel, trekking across Sudan and Egypt’s Sinai Desert in order to get there. But Bedouin gangs began to kidnap them in the Sinai and to demand ransom payments from relatives who had previously made it to Europe or Israel.

According to a study conducted by researchers from the Netherland’s Tilburg University, Sinai Bedouin gangs tortured and extorted estimated 25,000–30,000 victims between 2009–2013 and killed more than 5,000. The leader of one of the gangs, a Bedouin trafficker known as Abu Faris, admitted in an interview cited in the report to have killed more than 1,000 hostages. The total amount of money that the gangs have successfully extorted from the victims’ families during that five-year period is believed to be a staggering $622 million.

Some of the data in the Dutch study was provided by Estefanos, a 38-year-old activist-journalist who emigrated to Stockholm with her family when she was 15. She hosts a radio program called Voices of Eritreans in her native Tigrinya language that is widely listened to by members of the Eritrean diaspora.

Estefanos first heard about the problem several years ago when a listener called in to the radio show telling her that he desperately needed money to rescue a family member. Estefanos had trouble believing him but soon found herself besieged with other requests. She then began to devote herself to a campaign aiming to put a stop to the kidnappings. But she and the human rights organizations that assisted her were unable to get cooperation from the Egyptian government.

One of the people who heard Estefanos talking about the kidnapping problem in 2011, was an Israeli filmmaker listening to her Voice of Eritreans broadcast in a south Tel Aviv café frequented by Eritrean refugees.

“I don’t understand Tigrinya,” Keren Shayo tells The Jerusalem Report.  “But there was something very animated about her tone of voice that caught my attention.”

At the time, Shayo was working on a film dealing with the African migrants and refugees in Israel. She had come across a mysterious grave in a cemetery at Kibbutz Hatzor in southern Israel where two Hebrew words were inscribed on a tombstone: almoni mistonen, “an anonymous infiltrator.” “The starting point of my film was going to be trying to figure out who the person buried there was,” says Shayo, noting the unseemliness of designating a deceased person in this way.

Once Shayo got wind of the kidnapping practice, she contacted Estefanos and made her investigations the focus of her film. The film follows Estefanos as she converses with the captives and their kidnappers over the phone from Sweden and later on during a trip to Israel and Egypt.

One of the hostage stories that Estefanos investigates eventually leads to the “anonymous infiltrator” tombstone when Estefanos tries to trace what has happened to Timnit, a 20-year-old woman who has been missing since a $30,000 ransom fee was paid for her by Timnit’s brother and husband.

Another hostage story Estefanos probes is that of Hiriyti, who was pregnant when she got kidnapped. From heartbreaking phone conversations Hiriyti has with Estefanos and her husband Amaniel in Tel Aviv, we learn that the young woman gave birth while being chained inside a Bedouin torture house and that she is being raped every night.  Amaniel manages to raise the funds needed to free Hiriyti but when she reaches the Israeli border fence she is turned away by the Israeli soldiers.  She and her child get sent back to Eritrea where she remains separated from Amaniel, whose life will be at risk if he returns there.

When Shayo is asked if she thinks the film will bring about change, she points out that in recent months there has been some progress. Following several European screenings of “Sound of Torture”, Estefanos has garnered increased support for a motion she is taking to the European Parliament to call for a halt to the kidnapping practice. Shayo however isn’t overly optimistic. “Until the political situation in Egypt stabilizes, it’s really hard to put pressure on them,” she observes.

She notes that even the construction of the border fence that separates Israel from Egypt hasn’t deterred the kidnappers. “Instead of taking captives in the Sinai the Bedouin gangs are now capturing Eritreans in refugee camps in Ethiopia and even in Eritrea itself,” says Shayo.

Shayo, 34, has been active in a number of Israeli volunteer organizations that support African migrants and refugees in Israel and has made several films relating to the problems of migrants and refugees in both Israel and abroad.  As a cinematographer she filmed the 2008 Israeli documentary “Haplitim” (The Refugees) as well as a 2011 documentary about Mexican migrants who illegally cross the border into the US.

She notes that the stories of people whose lives have been turned upside down by being uprooted from their native land are close to her heart. “I grew up in a home where both my parents often talked about what life was like for them in the countries where they were born,” she says, referring to her father who grew up in Aleppo, Syria and her mother in Beirut. Both fled to Israel during the ’60s.

Shayo does hope her film will help change the attitudes of many Israelis towards the Eritreans and lead to an improvement of their status. “There are about 8,000 survivors of the Bedouin torture camps in Israel today,” she says.  “Many remain traumatized and ought to be recognized as the victims of trafficking and receive proper psychological treatments and social benefits,” she adds, referring to a scene in Tel Aviv’s Levinsky park where one of the Eritreans, while talking about her experiences in captivity, suddenly breaks into a hysterical fit.

Much of the emotional impact of “Sound of Torture” is achieved through hearing the voices of the captives and seeing the pained expressions on the faces of their family members as they listen helplessly to what is happening to their loved ones.

Another kind of poignancy is evoked in a scene where Estefanos visits the Egyptian side of the border at a point where many Eritreans have climbed over a barbed-wire fence. She notes that Egyptian soldiers often fired at the refugees as they fled and plucks several pairs of children’s shoes and women’s clothing from the fence.

“I am reluctant to make comparisons,” concludes Shayo, “But anyone who sees these images, especially at a time of year like now when Holocaust Day is being commemorated, can’t help but feel a connection.”