Magazine article The Town I Thought I Knew

The town I thought I knew 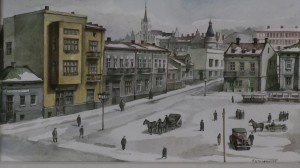 I came to Kalusz, looking for the town where I felt like I had grown up, even though I had never been there before. 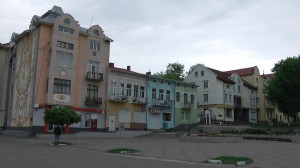 My father had talked so much about life in his Galician shtetl that some of my strongest childhood memories were of his reminisces about a vanished way of life. But because of the bitter conclusion to our family history there, when he left Kalusz after the war, he swore to never set foot there again. He also vehemently opposed my desire to visit the town.

Several years ago, after he passed away, I decided to see things for myself. My first impressions were quite disappointing.

Kalusz in my father’s day had been a vibrant, multi-cultural hodge-podge of 15,000 at the eastern edge of the old Austro-Hungarian province of Galicia, where Poles, Ukrainians and Jews rubbed shoulders with one another. The Kalusz that I encountered had a population of 70,000 but it was homogeneously Ukrainian, with blue-and-yellow Ukrainian flags draped at nearly every street corner. The appearance of the town was not very beckoning: The streets were full of pot-holes, and many of the old buildings appeared neglected and crumbling.

There were no signs of Jewish life. I searched long and hard for my father’s house with an old map, but the Polish street names had given way first to Soviet Union ones and later to Ukrainian ones. Even when I tried to retrace my father’s steps in the nearby forests and Carpathian Mountains, where he hid for nearly three years during the Holocaust, everything was so peaceful that it seemed almost impossible to conjure up his wartime experiences.

But just when I was ready to give up and leave empty-handed, I met someone who helped me find clues about my family and piece together stories about their past. As one clue led to another, I became transfixed by the place and decided to make a film. Later on, I learned from other fellow descendants of Eastern European shtetl-dwellers that it was not uncommon for people on journeys of this kind to make uncanny discoveries, in all kinds of different ways.

Marla Raucher Osborn, a member of a research group of the descendants of Rohatyn, a town just north of Kalusz, notes that one of these uncanny types of experiences is encountering someone who seems like they have been waiting for us to come.

In an interview on the Vanished History website, Raucher Osborn recalls a visit a friend of hers made to his father’s shtetl in Poland: “A farmer walked him into a barn. Underneath a protective cloth cover was a large Jewish headstone – fully intact and readable – of my friend’s grandfather. The farmer said: ‘What took you so long – I have been waiting?'”

The person waiting for me in Kalusz, so it seemed, was Tanya Pankova, an English teacher in her early 30s, who I met almost by chance and who offered to show me around. Tanya is one of the few Jews living in Kalusz today. Her family came to Kalusz after the war and she received a school education that erased any mention of the town’s Jewish history. When she heard about my quest, she was eager to help me unravel the past.

My search for the past became Tanya’s, too, and she became one of the film’s protagonists. Placed in her hands, my father’s stories helped lead us to locations that matched his descriptions. 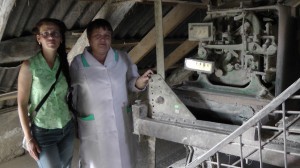 Tanya was perfect for the role. Unlike my previous Ukrainian translators whose nationalistic defensiveness led them to censor questions and answers, Tanya was open-minded, proud of both her Ukrainian and Jewish identities. She also had a disarming innocence that enabled her to quickly establish rapport with strangers.

One place we tracked down that played a role in one of my father’s teenage chores was the Kalusz brewery. On Saturday afternoons, when the men would gather in the synagogue for the shalosh seudos meal, he would be sent to the brewery tap-room to fill a wooden bucket. The oddly familiar taste of the beer surprised me. The brewery, as it turned out, had also been waiting for me. When we returned there later on, tasting the beer would lead me to an epiphany that would bring the film to its climax. 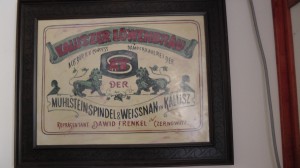 The brewery was not the only building connected to the town’s Jewish past. In the older neighborhoods, many of the old-timers – once we assured them that we hadn’t come to take away their homes – acknowledged that they were living in buildings that had once been inhabited by Jews. But as many of these elderly Ukrainians had been relocated from other parts of the former Soviet Union by the government after the war, they didn’t have any first-hand accounts of the previous occupants. 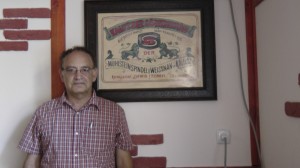 To get first-hand accounts, we decided to try our luck in the countryside, where farmers continue to work the land as they have since before the war, sometimes even with horses and ploughs.

Guided by my father’s stories of what happened when World War II broke out, we followed the train tracks out of town through cornfields and along the banks of fast-flowing rivers. At the age of 23, somewhere along that railway line, my father had jumped out of a train bound for the Belzec concentration camp.

As we got closer to the foothills of the Carpathian Mountains, a rickety-rackety vintage freight train ominously rumbled by.

Then, a family spanning three generations stacking hay with pitchforks came into view.

“I remember the Jews; they did some primitive things,” recalled Michail Ivanovich, the 84-year-old family elder. In an apparent reference to Sukkot, he described how, as a child, he used to climb up on a ladder to peer inside “the funny huts with fruit and pumpkins hanging from the ceiling.

“When they prayed, they wore some kind of cube,” he added, cupping his hands on his forehead. “And they kept saying: ‘baraka ata, baraka ata‘. What did they mean by that?”

More than 70 years had gone by since Ivanovich began wondering about the meaning of the Hebrew words for “blessed art thou.” Now it befell me to be the one to explain it to him.

“You see, I told you,” he said to Tanya with a sense of satisfaction. “I knew what they were saying; I just didn’t know what it meant.”

Moving higher up into the foothills, we encountered a farmer raking leaves beneath trees loaded with ripening red plum. Volodymir Michelovich said he was 12-years- old when the war broke out and sure enough he had seen what happened.

“They were put on wooden planks where they were shot – five Jews for every gunshot,” he related.

Why, we asked, did he think the Jews were killed?

“Because they killed Jesus Christ… and because they are lazy… They would rather trade water than chop down trees,” came his response.

Not all of the farmers we encountered were anti-Semitic. One Ukrainian family that I managed to trace had briefly sheltered my father in the hayloft of their barn towards the end of the war. When I asked Xena Pankovich, who as a child had brought food in a pail to feed my father, why her parents had been willing to take the risk, she replied: “They were in such distress; they had to be saved.”

Nearly every elderly Ukrainian we met in the rural areas had vivid memories of their Jewish neighbors from before and during the war. This perhaps shouldn’t have surprised me. After all, a sizeable Jewish population lived in the Galician region for hundreds of years, reaching a total of close to one million during the interwar period, when Galicia became part of Poland.

What caught me off guard, however, was the eagerness of the former neighbors of the Jews to share their memories. Their desire to talk about what they remembered, it turned out, was as great as our desire to find out everything we could. Again and again, I had the feeling we were the first people to ask about things that had been brewing in them for more than 70 years – almost as if they had been waiting for us to come. As we parted company, often after turning down repeated invitations to drink vodka, I also pondered if we would be the last.

Even more unexpected for me were the feelings that meeting these people stirred in me.

When I watched Michelovich diligently pruning his plum trees, something in his manner reminded me of my own father, a passionate gardener who had raised fruit trees in our backyard in Toronto.

And when I was invited into the kitchen of Xena Pankovich, the smells and flavors were pure déjà vu. Nowhere else in the world had I tasted soup with the texture of noodles and the careful blending of fresh dill that so closely resembled my mother’s cooking.

Who learned from who? Did the Ukrainians influence the Jews or was it the other way around? Was it possible that my grandmother had taught the Pankovich family a recipe and now one descendant was sharing what she knew with another?

I suppose it doesn’t really matter. When you live as neighbors for generations, a certain kind of bond is formed, and both groups, knowingly or not, pass the same things down to successive generations.

What did matter was that my journey had helped me uncover fragments of my family’s past and, in a certain way, bring it back to life.

“Reflections are what extend the life of a lost civilization,” says cultural historian Sergey Kravtsov. “The lost Galician civilization lives as long as we are remembering our parents and their places – which are also our places.”

Bernard Dichek is the director of the documentary “The Kalusz I Thought I Knew” which will premiere at the Haifa International Film Festival during Sukkot.