The doctor who stayed 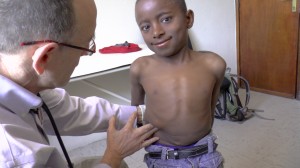 Mzungu come and mzungu go is a comment frequently heard in sub-Saharan Africa. Mzungu is the Bantu word for “white man,” and when Africans make this observation they could just as easily be referring to the colonialists who robbed them of their natural resources; the NGOs who provide food aid; or the medical missions that bring doctors for brief intervals.

But Rick Hodes has stayed.

Based in Addis Ababa, the American-born Hodes is a Jewish doctor who has lived and worked in sub-Saharan Africa for nearly 30 years. Along the way, he set up Ethiopia’s sole clinic for spinal deformities and attracted a cadre of young Jewish volunteers. His home, located on a small unmarked street not easily found even by taxi drivers, has also become a well-known gathering place for Jewish travelers on Friday nights and holidays.

“We probably have the largest collection of the worst deformities in the world,” Hodes tells The Jerusalem Report, describing the condition of the patients that come to his clinic. “We have lots of kids who have deformities at 180-degree angles, some even more than 200 degrees with spines shaped like saxophones.”

Deformed bone structure, besides causing the children to be taunted and teased by their peers, also makes breathing difficult and often leads to other degenerative conditions. “Without medical intervention, they almost certainly face short and miserable lives,” he notes.

The specialized surgery that Hodes’ patients require is not available in Ethiopia, but he has found a way for them to be treated in Ghana by an internationally renowned specialist.

“It costs about $20,000 for the procedure to be undertaken in Ghana compared to about $500,000 in the US, says Hodes, pointing out that the price tag is still well beyond the reach of families living in one of the world’s poorest nations. However, Hodes has been able to raise funding from donors around the world including the American Jewish Joint Distribution Committee (JDC), the veteran North American Jewish humanitarian agency that has supported Hodes and his work for more than 20 years.

”Besides the relatively lower cost, having the therapy done in an African country, and in groups, also reduces the psychological trauma,” he notes.

On a recent Friday morning, about 20 Ethiopian families gathered around Hodes in the crowded waiting room of his clinic. As Hodes explains the risks and potential benefits of the surgery, the families listen intently, their faces expressing both hope and fear.

There is no guarantee that the surgery will be successful, Hodes tells them. He points out that although almost all of the 400 Ethiopian patients he has sent to Ghana have returned home in a significantly improved condition, three have died and several have become paralyzed.

“I’ve been in your situation myself,” he continues. “Three of my (adopted Ethiopian) children have had six surgeries between them, so I understand what you are going through.”

The children Hodes adopted, five in total, were mostly orphans he came across in desperate need of medical help. In adopting the children, Hodes wanted both to give the children a home and provide a practical way for them to get medical treatment.

“Once they were adopted I could get them taken care of through my American medical insurance,” he notes. “But I realized quite quickly that becoming a serial adopter of children in need of medical care was not something I could keep on doing,” he adds, explaining how he came up with the idea of setting up his clinic in 2006 with support from the JDC.

To make the clinic sustainable, Hodes has begun to implement a plan that eventually will include training local Ethiopian doctors and involve diagnostic procedures at the national level. In addition to spinal problems, the clinic also provides care for cancer and heart-disease patients.

In doing all of this, Hodes, 61, who grew up on Long Island, New York, has come a long way from the time when he first contemplated a career in medicine during the 1970s.

“I did a university degree in geography and spent time hitchhiking around the US, ending up in Alaska where I lived for a while and spent a lot of time thinking about what I wanted to do with my life,” recalls Hodes. “Eventually I came up with the idea of working overseas as a doctor,” he says.

Returning to the American mainland, Hodes studied medicine at the University of Rochester and trained at Johns Hopkins Hospital before going to Ethiopia for the first time as a relief worker during the 1984 famine. He soon returned on a Fulbright Fellowship to teach internal medicine, and in 1990 was hired by the JDC to serve as its medical adviser for the country and to take care of the Ethiopian Jews who were being airlifted to Israel during Operation Solomon.

“I was the doctor for about 70,000 Jews before they became Israeli, that’s about one percent of the population of Israel,” notes Hodes.

When Hodes is asked if he himself considered coming on aliya to Israel, he points out that Israel, unlike Ethiopia which has only 2,000 doctors for a population of more than 90 million, does not suffer from a shortage of doctors.

“I think that as Jews we should look after Jews in need but that we shouldn’t be limited by that boundary,” he adds. “We have enough organizational skills, expertise and ability to help more than just our own people and, in doing so, to create a relationship with the rest of the world.”

During the years Hodes has lived in Ethiopia, he has become an increasingly observant Jew, putting on tefilin every morning and carrying out the Shabbat and holiday rituals. But he does so with a few twists of his own, one of which can be seen in his home on Friday nights.

Prior to partaking in a vegetarian meal, he gathers the members of his household and guests together in a circle and leads everyone in the singing of “If I had a hammer”, an inspirational American folk song written by Pete Seeger that was frequently sung during the protest movements of the 1960s.

There are about 25 people in the circle. Most are young Ethiopians in their teens or younger. Some are Hodes’s adopted children and others are current out-of-town patients who have nowhere to stay. Many are former Ghana patients who are doing volunteer work with Hodes or staying with him after surgery to get stronger before returning to their villages or just like coming to his house so that they can hang out with their friends. Hodes and some of his children are Jews, the rest are Christians or Muslim.

“It’s the hammer of justice, it’s the bell of freedom, it’s the song about the love between my brothers and my sisters all over this land…”

The singing ends and Hodes recites the Kiddush and blessing over the bread. One of the dinner guests walks over to a visitor and shows him photos depicting how hunched over he was prior to surgery.

“Rick’s a good guy,” says eight-year-old Behailu. “He helped me to walk again. I’d like to be a doctor so I can help people, too.”

Rhode Islander Dan Combs, 26, who studied philosophy at Vassar College, had just finished writing a book about Myanmar when he heard about Rick Hodes’ clinic.

“I had decided that I wanted to be a doctor and I was interested in humanitarian work, so volunteering to work with Rick as part of the JDC Entwine Global Jewish Service Corps seemed like a good opportunity,” Combs tells The Report.

Today, nearly two years after coming to Addis Ababa, Combs is sitting in the clinic with an eight-year-old patient on his lap conversing fluently with him in Amharic. As they joke about playing soccer together, it’s clear that he and the young Ethiopian boy who lives at Hodes’ house have developed a warm relationship.

“The line between your professional work and personal life can become quite blurred when you do work like this,” says Combs noting that he learned quite early on the need to be able to build a barrier. “I was quite devastated when someone I had become quite attached to died because of a bureaucratic delay in getting him surgery,” recalls Combs.

“But there are many rewarding moments, especially when we go to the airport to receive the kids coming back from surgery in Ghana,” says Combs. “When we send them off to Ghana they are all walking crooked and bent over and are so lacking in self-esteem that many are unable to go to school. Then when they come back, suddenly we see them walking tall and full of self-confidence.”

Combs notes that his position in the clinic has evolved to the point where he is supervising 12 people, many of them quite a bit older than he is. “The only way you can earn their respect is by being passionate about the work, which is what drives me.”

Combs, despite the satisfaction the work has given him, has decided he doesn’t want to be a doctor after all and plans instead to go to graduate school in the fall to study international relations. “I hope to continue in the humanitarian field, perhaps working for the UN or in disaster relief.”

During February of this year,  Combs, along with the other 26 members of the Jewish Service Corps will travel to Israel for an annual get-together. Some, like Combs, are doing non-sectarian work in places like Rwanda or the Philippines while others work with needy members of the Jewish community in the US or Israel.