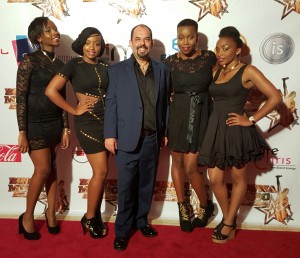 “It will be easy to find me,” says Gilad Millo, arranging to meet a visitor from Israel at a Nairobi nightclub where he is performing on a Sunday night in February. “I will be the only white guy on the stage.”

Being the sole non-African to perform alongside Calabash, a leading Kenyan music group, is just one incongruous aspect of the 44-year-old Israeli’s Cinderella music career.

Until last April, Millo had never recorded a single song. But when he released his first, “Unajua” (You know), it immediately shot to the top of the Kenya pop music charts.  Nearly a year, and three more hits later, the name Gilad is a household word in this nation of 44 million people.

He is a frequent television and radio talk show guest and is widely recognized on the streets. Even more surprising is that all of his songs are written and sung in Kiswahili, (the Kenyan version of Swahili), with only occasional phrases of English tossed in, similar to the way native-born Kenyans mix the two languages.

When Millo walks on stage at the Black Diamond lounge the crowd enthusiastically applauds his entrance. Soon, the members of the audience are all swaying to the reggae beat of “Unajua.”

It becomes clear in conversations with The Jerusalem Report that the wide spectrum of people listening to his melodies is also paying close attention to the words.

“Unlike a lot of Kenyan songs, Gilad’s lyrics give you something to think about,” says Amos Opondo, a 30-year-old taxi driver. “The lady in the song has left Gilad and she is trying to come back to him,” he says, offering his interpretation.  “She is now somewhere with another man but she says he doesn’t know how to show love. In response Gilad says ‘Umepotela wapi‘ where have you been lost?”

Opondo points out that when he first heard the song on the radio he was sure the singer was a native Kenyan. But, like many other Kenyans, when he discovered that Millo was “a mzungu who sings in Kiswahili” the description by which Millo has come to be known, it endeared him to the mzungu (white man).

“Kenyans respect the way Gilad has embraced our culture,” says Adelle Onyango, a well-known Kenyan poet and radio host. “Kenyan songs are full of colorful, poetic language drenched in emotion,” she explains. “‘Unajua‘ reflects that. It is a universal love song, sort of like British singer Adele’s ‘Hello’ about ex-lovers thinking about each other, yet the images and emotions are at the heart of Kenyan culture.”

“Unajua” was first released as an audio recording, so it wasn’t until several months later, when the video version came out, that Kenyans discovered what Millo looked like. Many were surprised. “It wasn’t just that he was a mzungu, but that he came across as being just one of the guys,” says Francisco Ferdinard, a university student.

In the video, Millo, wearing a red lumberjack jacket, wheels a bicycle that needs to be repaired. “That bike is a typical working-class bike we call a black mamba [snake]. And the  way he  waves to the bike repair man, holding his hand in the air for an extra second, that’s the way Kenyans do it,” adds Ferdinard.

He also points out how the down-to-earth Gilad persona contrasts with the well-dressed woman ex-lover (famous Kenyan singer Wendy Kimani) who sings back-and-forth with Millo. “She obviously is of a higher standing in society.”

Ferdinard concludes his take on the song by reflecting on the symbolism of the bicycle. “The song ends with Gilad walking away with his bike after it has been repaired. But we never see him riding it. The bike may be repaired but not their relationship.”

In contrast to the melancholy “Unajua“, Millo’s second composition, is an Afrobeat love song with a happy ending. This time the boy gets the girl and they marry. “Sema milele” (Stay forever), has become a Kenyan wedding party favorite, reminiscent of the way Arik Einstein’s romantic “Ahava b’mabat Rishon” (Love at first sight) has become a mainstay at Israeli nuptials.

Like “Unajua“, “Sema milele” captures ideas that are unique to Kenyan society, suggests Patrick Wanyoko, a 32-year-old marketing manager. “In the song, Gilad says ‘tunaweza,’ which means ‘we can do it together.’ This is a kind of rallying cry that Kenyans use when they are faced with something they haven’t been able to do,” observes Wanyoko, noting that the song has a very reassuring tone.

The title of Millo’s most recent song is “Salama”, which means peace or good and is often used somewhat like the Hebrew slang expression sababa, as a response when one is asked how one is doing. It is an autobiographical song, in which Millo directly addresses his “otherness.” “It ain’t about/his color or his race/Don’t need a label/To describe his face/Who says a white man can’t sing Swahili /He’s black and white inside…” is how the song begins.

“‘Salama‘ is seemingly a song about a vision of equality between whites and blacks,” says Wanyoko. “But many Kenyans take it a step further and think it has to do with how everyone should feel equal, including members of different communities.” He points out that of the 42 tribal communities comprising the Kenyan population, five tend to dominate.

“But we are all Kenyans. We are all equal,” asserts Wanyoko, suggesting that the song implies a sense of how things could be. “Salama. Everything is good,” he repeats. 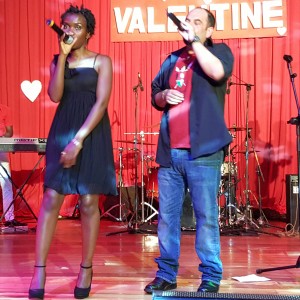 For his part, Millo has been completely surprised by the response to his music. “I never imagined my songs would do this well,” he tells The Report. “Not in my wildest dreams.”

Despite all of the recognition, he continues, almost as if nothing has happened, with his full-time job as a business-development executive with Balton CP, one of the largest industrial concerns in East Africa.

Millo first came to Kenya during a post-army backpacking tour in 1996. His father, the late Yehuda Millo was a career diplomat, and the family lived in Germany, England, the US and Turkey, as well as Israel, while Gilad was growing up.

After the army, Millo formed a band in Israel and briefly considered a career in music.

“But after I got married and my son was born, I realized that it would be hard to make a living,” he recalls. His knowledge of languages and foreign affairs landed him a job as a foreign news correspondent at Channel 2 TV. Then, after training as a cadet in the Foreign Ministry, he became a diplomat. His service included postings as consul-general in Los Angeles and deputy ambassador in Kenya.

“I’ve loved Kenya since I first came here after the army and saw how warm and generous the people are,” says Millo, who decided to give up his diplomatic career in order to live in Kenya when he was offered a job in Nairobi with horticulture business Amiran, a subsidiary of Balton CP.

It was a drastic career change not many people make. “Few people who get into the diplomatic service ever leave,” says Millo, noting that the year he applied he was just one of 20 out of some 3,000 applicants to be accepted. Unofficially, however, Millo may today be doing more diplomatic service on Israel’s behalf than ever before.

“Whenever I am on a TV or radio talk show, they often ask me about my background and the work that I am doing,” says Millo, explaining that it gives him a chance to talk about two subjects he is passionate about – getting young people in Africa involved in modern agriculture and Israeli innovation.

In a recent interview on a Kenyan television show called “Morning Express”, he combined both as he talked about a youth project his company has developed called “Farming is Cool”.

“Kenyan youth often aren’t interested  in agriculture because their parents may not have done well with it, but we want them to see it as a business,” he explained to the interviewer, giving the example of Israel, a country “26 times smaller than Kenya with no water that has become a leading exporter of horticulture to Europe.”

In addition to promoting Israeli innovation every chance he gets, Millo, together with his brothers, has set up a philanthropic fund known as “Israel for Africa” in memory of his father. All proceeds from his music go to this fund.

After living in Kenya for a combined total of 12 years, Millo says he feels very much at home, though he, his wife Hadas and teenage children continue to speak Hebrew in their home.

As he sings in “Salama“: “He knows he won’t forget Jerusalem/Came searching for the Promised Land/In Africa be a humble man/He’s black and white inside.”

Millo’s following continues to grow, with his songs garnering tens of thousands of likes on YouTube and people on the street stopping him for selfies.

He says, however, the most heartwarming response he ever received was a message from a Kenyan woman working in Jordan, because it showed him how music transcends borders and nationalities.

“She described what sounded to me like a tough life with no friends.’But at night when I am at home alone,’ she wrote, ‘I listen to Unajua and I feel at home.'” 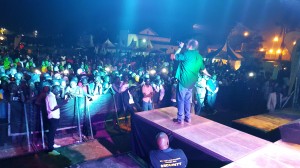