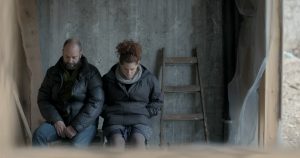 Outdoors could be the surprise hit of the season

Scenes from an Israeli Marriage

During the summer the Israeli Film Academy  screened  31  new Israeli feature films to its members. As most of the films have not  yet been released to the public, the closed showings enabled Academy members to  vote for the winners of this year’s Ophir Awards, the equivalent of the American Oscars. Now in its 35th season, this year’s Ophir competition reflected a burgeoning   industry that produced a record number of films with greater technical mastery  than ever before.

But despite their technical prowess, many of the films, including Foxtrot, which won the Best Picture award, merely rehash well-worn themes relating to the tragedies of the Israeli-Palestinian conflict  and give viewers the feeling that  they are watching something they have  seen before.

One refreshing film however that stands out from the crowd is Asaf Saban’s Outdoors (Bayit B’Galil).  When Saban started shooting his debut feature film  two years ago with a skeletal crew and two actors, he did not yet have  any financial support from either local or foreign film funders. He did however have a sensitively-written and carefully thought-out original screenplay, two very capable actors and a talented cinematographer ready to hit his stride in his first feature production.

Outdoors centers around two characters and a single location, with the storyline as simple as can be:   Ya’ara and Gili, a thirty-something Tel Aviv couple, played by Noa Koler and Udi  Razzin, decide to leave the urban rat race and build a new home in the peace and quiet of the Galilee countryside in the north. The film opens with the voices of Ya’ara and Gili discussing an animated 3D simulation of their vision of the house prepared by an architect.   The remainder of the film  takes place at the site of the house during various stages of construction. As the couple make periodic visits they thrash over everything from whether the kitchen tiles should be sand or sesame colored,   to the meaning of a chance encounter Ya’ara has with a previous lover who happens to visit the site.  As the construction of the house continues, with both setbacks and progress, so does Ya’ara and Gili’s relationship, with the twosome sometimes at each other’s throats, other times showing loving warmth. It is both a story that is uniquely Israeli, with its nuanced references to places where young couples hang out in Tel Aviv and with its depiction of friendly but distanced  relations between the couple and the Arab construction workers. At the same time, it is a narrative  that is completely universal in its examination of love, marriage and long-term commitment, filled with witty dialogues, poetic charm and convincing acting that  calls to mind the offbeat and innovative works of two  independent American filmmakers who also have portrayed marital relations, Richard Linklater’s romantic trilogy (Before Sunrise, Before Sunset and Before  Midnight) and Jim Jarmusch’s Paterson.

Saban, when asked if he was influenced by other films that deal with married couples acknowledges a debt to Swedish filmmaker Ingmar Bergman’s Scenes from A Marriage which he describes as ‘the bible of dramas about couples”.  But Saban, 38, who grew up in a small Western Galilee town and today lives with his wife and young child in an  apartment in Jaffa, didn’t have to look any further than his own peer group  for inspiration. “I wanted to explore  one of the main dilemmas of my  generation,” says Saban referring to the challenge that many Israelis face today  after putting off marriage to a relatively late age.

“My friends grew up in a very privileged way. We had the sense that unlike our parents who were solely focused on finding practical jobs that would enable them to support themselves, we grew up in a kind of anti-bourgeois  fantasy: we were more concerned with ourselves, with self-realization, with doing things that we wanted to do like studying art or film. Not surprisingly we are a generation with frequent relationship break-ups  that didn’t start getting married until much later than our parents did. But then suddenly people decide to settle down and get married and they realize that they can no longer be so self-centered. The fantasy is over and they have to come to terms with a new reality.”

Saban points out that he wanted to examine this dilemma using both the concrete and fantasy  elements of film language,. He  suggests that the building of the house, with its limitations, is similar to the limitations of a relationship. “It’s the moment in your life when you have to decide between fantasy and reality,” he says referring to a scene when the architect rejects their plans for the placement of a window as being unfeasible.

Significantly, even though many of the scenes feature tensions between the two protagonists, neither husband or wife seem to come out of any dispute as either the winner or the loser. “I was aiming for a kind of philosophical truth where in an authentic relationship there is always a kind of dialectic at work,” says Saban, noting that  the two struggle together without either appearing to be the hero. “You are led to see how they both come out of their disagreements with their own sense of being right.”

Despite the theatrical style of Outdoors, Saban came to filmmaking from a different background — the visual arts which he studied in high school before taking up filmmaking at the Beit Berl Midrasha Art College.   “I tend to think in images,” says Saban, adding that he tries to strip down  dramatic situations “to their cinematic essence.”

One of the interesting aspects of Outdoors is indeed the visual  style  that Saban developed working together with cinematographer David Rudoy. As is often the case in avant-garde works of art, viewers  senses that something new and different is happening without being able to put their finger on what exactly the novelty is. The novel film language of Outdoors includes both the film’s  structure and the placement of the camera: each scene begins with a look at the physical changes that have occurred to the house and then the camera, without ever actually entering the house, begins to observe the interaction between the couple within or beside the house. “We wanted the house itself to be almost like a third protagonist, along with Ya’ara and Gili,” says Saban.

Most of the scenes also are shot in long takes of several minutes.

“It’s unusual for directors to work like that,” says David Rudoy who has been part of production crews on many feature films, including Joseph Cedar’s Footnote and Natalie Portman’s A Tale of Love and Darkness. “Usually directors aren’t willing to take risks and so they back up each line of dialogue with numerous shots from different angles,” explains Rudoy, noting that productions need to have adequate budgets to do so. “But because of the limitations under which we worked, and because as the production moved on it became clear that the long takes were working so well, Asaf decided to go with more and more long takes.”  As a result, Rudoy suggests, the actors seemed to put everything they had into every shot, knowing that mistakes couldn’t be padded over in the editing room.

Also unusual for a feature film production, was the sporadic way in which shooting days were scheduled. “The house that we used was a real house being  built by my brother,” explains Saban. “So  we had to spread out the shooting days to match the pace of the construction, which took place at intervals we couldn’t control over the course of about a year.”

There also was another unexpected factor which affected the shooting schedule.

One day after shooting had begun, lead actress Noa Koler informed Saban that she had some personal  news to share with him: Ya’ara was pregnant. Saban  willingly revised the script and incorporated the new element into the story. It did mean however coordinating the script changes to synchronize progress in Koler’s pregnancy with progress in the construction.

“We all lived and breathed this film production for the better part of a year,” recalls Rudoy, noting that cast and crew were constantly juggling their personal schedules.

Despite the difficulties, it was an exciting production to be a part of,” says Noa Koler, whose newborn child appears in the final scene. “It was very different than anything I had worked on before. It was like fringe theater.  Art for the sake of art. But it was a project that captured my heart  from the very start. “

The different type of acting that Koler, 36,  is referring to includes her many years as an actress with Jaffa’s Gesher Theater and her recent critically-acclaimed performance as an unmarried ultra-orthodox woman in  Rama Burshtein’s romantic comedy Over the Wall, a role that won her the 2016 Ophir Best Actress Award.

“Working on this film couldn’t have been more different than working on Over the Wall, where every word of the script was written in advance and every shekel  of the budget was approved by the group funding the film. Here we were all able to offer ideas at every stage,” she says, adding, by way of example, how  the  scene where  Ya’ara informs her husband that she is pregnant was altered after input from cast and crew.

“The first time we shot the scene about the pregnancy Gili responds by sweeping Ya’ara off her feet out of joy. It had a real Hollywood feel to it. But it didn’t feel right. Because many of the crew and cast members or their spouses had actually become pregnant in recent months, we talked over what they felt like when they were informed about the pregnancy by their partners.  Shock, fears and doubts were as much a part of it as joy,” says Koler, noting that the frank discussion led the scene to be  shot again in a more nuanced way.

In developing the character of Ya’ara Koler points out that she often tried to think about her own fears when she gets  into situations that were “outside her comfort zone.” Speaking to The Jerusalem Report a few weeks before the Ophir Award ceremony, she observed with irony that she was reminded of Ya’ara as she struggled to choose a dress to wear for the occasion. “ I’m not someone that pays a lot of attention to clothing but suddenly I’m   terrified about what the dress I choose is going to say about me. That’s how it was for Ya’ara choosing between the sesame and sand colored tiles. It was just some kitchen tiles. But all of a sudden her entire identity, everything she stands for, was connected to a bunch of tiles,” recalled Koler.

After more than a year of work, without money to pay his actors or crew, Saban edited a rough cut of the film and showed it to film industry investors.  Impressed by what they saw, two film funds, the Rabinovich Foundation for the Arts and the Mifal Hapayis Arts and Culture Council , offered Saban the funding he needed to finish editing  the film and launch its distribution.

Outdoors could turn out to be the surprise hit of the season. The Academy screenings led to several rave reviews by local film critics and Noa Koler was one of the finalists in the Ophir Awards Best Actress category.

Outdoors will have its world premiere  at the Haifa Film Festival in October.