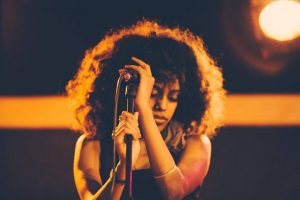 It wasn’t until Oshi went on a tour with a musical group outside Israel, that the 27-year-old Ethiopian-Israeli singer started to feel proud of her Ethiopian heritage. “In the United States whenever people talked to me about my Ethiopian background, they were always impressed. It was like ‘Wow!’,” recalls Oshi.  “It was the opposite of the way people here often make me feel like they feel sorry for me,” she  explains.

Oshi grew up as Oshrat Masala in the northern Negev town of Kiryat Malachi where her parents settled after immigrating to Israel in 1984. Like the children of many second-generation Ethiopian Israelis, Oshi was  eager to fit in with Israeli society. She  spoke Hebrew at home with her parents  and she didn’t have any desire to  learn the native Ethiopian language of Amharic, though she did pick up some words as it was the language her parents spoke between themselves.

That all changed when she came back from an international tour as an accompanying musician with Israeli singer Mika Karny’s Kol Dodi ensemble. “I decided that if I wanted to go forward and build a music career of my own, I would have to first take a step backward,” she says, referring to her decision to look into her ethnic roots and gain a better grasp of Amharic.

Oshi’s decision to make her ethnic identity a source of pride rather than shame, she suggests, has played a key role in propelling her career forward. During the past two years,  she has written an original repertoire of songs, in both  Hebrew and Amharic, which has gained her critical acclaim as well as a wide following among the Israeli public.

Look inside yourself for the right words

They are on their way to you

…you know what I am talking about

Though  the above song, Look Inside Yourself (Chapsi BeTochech),  is entirely in Hebrew, when she gets to the end she adds a seemingly adlibbed refrain in Amharic

suggesting  that it is through her Ethiopian roots that she knows she will find the answers she is seeking.

Aweki,  another song with a similar theme,  written entirely in Amharic,  was inspired by a young Ethiopian girl who caught Oshi’s attention during a performance in Philadelphia. “Our eyes met during the concert and I felt by the way she was looking at me that she was trying to ask me some kind of a question,” recalls Oshi. “It turned out that she was adopted in Ethiopia by an American Jewish family who had brought her back to the United States.  I was the first Ethiopian Jew that she had ever met and I talked with her about how helpful it could be for her to learn more about the country where she was born.”

Though her main focus is on her music career, Oshi has not shied away from joining fellow Ethiopian-Israelis in a number of the demonstrations against  discrimination and racism that have taken place in her hometown of Kiryat Malachi and other places. In her music, however,  she  is careful to do so it in an elliptical way.

I am walking in a cold land

Until I calm down

“I think it is important to be assertive and for us to stand up for our rights,” she says. “But at the same time I try to do so out of a sense  of love for our country. Also what is most important of all for me is that it is the emotion itself that stands out and is felt by the listener.”

Not all of her songs have either a social or political undertone. Many simply  deal with universal themes of love and loneliness. Performed in a captivating voice that jumps from rich vibrato to a gentle whisper, her melodies sometimes contain African  rhythms and cadences yet for the most part reflect the  qualities of modern  jazz or Israeli popular music.

In addition to a music career, she is currently developing a tv talk and entertainment show she hopes  will provide a platform to empower other aspiring Ethiopian-Israeli artists.

In this endeavor she is following in the footsteps of the Sigdyada, an annual festival of Ethiopian culture in which she regularly performs.

The Sigdyada, founded by Ethiopian-Israeli actor Shai Fredo, will be held for the seventh time this October at Tel Aviv’s Habimah Theatre.

“I got the idea for the Sigdyada from Harlem’s famous Apollo Theatre,” says Fredo, referring to the New York theatre that began showcasing Afro-American music and acting talent in the early part of the 20th century.

Sigdyada, explains Fredo, combines  the name of the Ethiopian-Jewish holiday of  Sigd with  Adleyada, the Israeli Purim holiday parade.  “The Sigd holiday was celebrated for centuries by Jews in Ethiopia,” says Fredo, noting that it was an opportunity for Jewish families from neighboring villages to gather together atop a high mountain in order to celebrate with singing and festive meals. “The same way that the Sigd holiday was a unifying factor in Ethiopia for the Jewish community there, I see the Sigdyada here as connecting Israelis of Ethiopian descent with Israelis of other backgrounds,” says Fredo, pointing out  that about 8,000 people attended the Sigdyada last year.

Fredo, 42, who immigrated to Israel as a young child, is the writer and actor of a prize-winning one-man theatrical performance called the Lion of Judea in which he tells the story of how he and the rest of his  family walked to Sudan in order to reach Israel. He also has acted in many Israeli plays and films as well as appeared in a tv series about the Ethiopian Aliya that was broadcast on IETV,  a cable tv station broadcasting in Amharic and Tigrit.

IETV was founded in 2007 by  Fasil Legesse,  54, a veteran television producer who immigrated to Israel in 1981. He points out that he has witnessed a significant change in recent years among the young members of the Ethiopian-Israeli community.

“You now see more and more  young people going on post-army trips to Ethiopia,” says Legesse, noting that they are eager to know more about the place where their parents and grandparents come from.

“Suddenly they see that there  are many things unique and exciting about  Ethiopian culture, whether it is the ancient temples and scenery of Gondar or the realization that injera has now become a trendy food around the world,” he says, referring to the  traditional Ethiopian flat bread which is made from a gluten-free grain known as tef. “Injera is considered to be a superfood,” says Legesse, adding with a smile that when a young Ethiopian singer recently won a tv singing competition she credited eating injera regularly as the reason for her having such a good voice.

Legesse remarks that the emergence of many new and talented Ethiopian Israeli artists, combined with a growing interest among the general Israeli public in Ethiopian culture, has led him to conclude that the  time is right to reach out to a mainstream audience. “We have plans to subtitle our entertainment and drama programs into Hebrew,” says Legesse. He notes that close to 20,000 households, representing a large share of the approximately 150,000 strong Ethiopian-Israeli community currently subscribe to IETV.

Legesse also is thinking bigger than just Israel. He points out  that Amharic and Tigrit, the two Ethiopian languages in which IETV produces its programs,  are also the languages of  Ethiopia itself, a country with  a population of close to 100 million people,  as well as of the  Ethiopian diaspora of several millions of people around the world. “We think that with the new generation of Ethiopian-Israeli artists, we can produce quality programs that will reach these large markets,” he concludes.