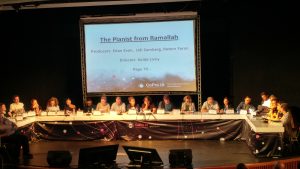 When  Rana Abu Fraiha was a young girl her mother decided to relocate her family from the Bedouin village  of Tal-e-Sabeh  to the Jewish town of Omer.   “I grew up in denial of my Arab culture, not wanting to speak Arabic, as if I was living with a hidden secret,” says Abu Fraiha, a  filmmaker in her early twenties, pointing out that she began to confront that secret when her mother was dying and requested  that she be buried as a Moslem in Omer’s Jewish cemetery. “As I approached the cemetery authorities with my mother’s deathbed wish, her last journey started  for me a journey of my own  to find my identity,” says Abu Fraiha, describing a film that she wants to make to an audience in Tel Aviv. She shows a short video clip of material she has already shot that includes  home movies of her childhood made by her father, discussions she filmed with her mother and scenes showing the conflicts  that arose when  male family members disagreed with Rana’s mother’s dying wish. “The male relatives brought back the patriarchal attitudes  of Bedouin society that my mother tried to escape when she left her village,” says Abu-Fraiha, noting that it was her mother’s hope that she would be able to raise her and her four sisters in  an environment where women have equal rights.

Rana is pitching her proposed film to a panel of about 20 commissioning editors from tv stations and film funds in 10 different countries.  Among them are representatives of Canada’s CBC Documentary Channel, France’s ARTE channel  and Germany’s ZDF tv station. Some of the potential investors express interest in supporting the film but others have reservations about whether or not an audience outside Israel will be able to follow the complex relations between Bedouins and Jews. One panelist is concerned about the film’s focus. “Will it be mainly the story of your mother, as  a woman who does something to change the life of her family,  or will it be more about yourself and your  search for your identity?”   she asks.

Welcome to CoPro,  an annual fund-raising event in which  Israel’s documentary filmmakers pitch their ideas to decision makers who may determine the fate of  their projects.  Now in its nineteenth year, CoPro has an impressive track record: it has led to almost 500 international coproduction deals and investments totaling  about 70 million shekels. Some of the most widely-seen Israeli films in recent years, such as The Gatekeepers and Presenting Princess Shaw, owe critical financial support to successful pitches made by their directors at  CoPro. Indeed, just to be among the 18 projects chosen to present at this year’s event, out of the hundreds that apply,  is in itself prestigious and  an indication that the film projects are likely to reach the screen. Yet, as successful  as CoPro has been in  attracting foreign investment to Israel,  the event also underlines the dependence that local filmmakers have  on foreign funding and inevitably raises questions about the consequences of foreign involvement in cultural undertakings.

Most of the filmmakers pitching at this year’s event, arrived with initial  commitments of between 100,000-200,000 Euros from Israeli funders such as the Yes-Docu tv  station or the New Israel Film Fund, but most productions require more than twice that amount — thus the need for one or more foreign co-producers.

Unsurprisingly, of the 18 topics presented this year about half related directly or indirectly to the Arab-Israeli conflict.  Interestingly enough though, in the discussions surrounding  several  of the projects, the foreign panelists seemed to suggest that the films would have a wider audience if the filmmakers paid more attention to the human interest aspects of their stories rather than  the political dimension.

This could be seen in the response to the  pitch made by Nir Baram. The best-selling and widely translated novelist , who is the  son of former Labor Party cabinet minister Uzi Baram, proposed a film in which he challenges the political narrative of his father’s party and of the  Labor Party youth movements in which he was once active.  Baram, 40, pointed out  that he grew up believing in the idea of a 2-state solution that was handed down to him by his father . Although  he remains vehemently committed to finding a resolution to the conflict, Baram  has discovered little resonance to this concept among Palestinians he has met at literary functions abroad or in his travels among Palestinian communities.  Much of the video clip that he showed illustrated clashing political discussions between himself and Palestinians, with whom he acknowledges that he, like most Israelis, have had very little contact. Only in a single  brief scene does he confront his father with his disillusionment.

Several  of the panelists suggested that instead of getting bogged down in the never-ending political discussion, it would be more interesting to see Baram focus on the father-son relationship and examine in greater depth the universal way a younger  generation often becomes disillusioned with the ideas of an older one.

Similar advice was given to Ilan Rubin Fields, who pitched the idea of doing a film about Meir Kahane, who led the Jewish Defense League in the United States before moving in the 1980s to Israel where he founded a  radical  right wing political movement.  Kahane’s party was eventually outlawed by the Knesset and dissolved after Kahane  was assassinated in 1990. Rubin Fields, whose parents were American Jewish Defense League followers of Kahane who immigrated  to Israel, contends that Kahane’s racist views have lived on and that he remains a hero to many today.

Here too, the panelists, stressed their interest  in the filmmaker developing the personal story of a son breaking away from his parents’ point of view.

The gap between  European and Israeli viewpoints became most apparent in the discussion surrounding Yulie Cohen’s pitch about her film tentatively entitled  Who Killed Jessica? Cohen intends to tell the story of  a Russian-born Tel Aviv woman who committed suicide after working as a prostitute for 20 years from the day she immigrated to Israel at age 16. Following Jessica’s death, women’s groups demonstrated outside the brothel  where she worked and the brothel owners were put on trial. Cohen’s film treatment involves telling  the story through animation and uses  actors’ voices to play the parts of real characters. Among the characters are a social worker, who is a former prostitute and who today works in the rehabilitation of prostitutes;  and a young man, a former client of prostitutes and a self-declared sex addict,  who changes the way he views women.

Several of the German and Dutch panelists  seemed concerned by Cohen’s decision to use animation, suggesting that seeing  the real characters on-camera would lend greater authenticity to the story. They also noted that in countries like Germany and the Netherlands sex workers are regularly interviewed on television and consequently audiences would not understand the need for anonymity that Cohen contended was necessary in Israel.

Not all of the subject matter  presented was  distinctively Israeli. Itamar Rose’s project , which he describes as  “the film that YouTube doesn’t want you to see,”  could be made anywhere. Rose’s  inspiration for making his expose style documentary derives from his  frustration in getting more than a few thousand people  to view  any of the critically-acclaimed art films that he regularly uploads onto YouTube. Rose, observing that some people manage to get their videos viewed by millions of people and also earn large sums of advertising revenue through the traffic that is generated to their YouTube channels, decides to go on a journey travelling around the world to meet the makers of videos that go viral. His sample film clip, starts out in a light-hearted,  humorous manner as he travels to the United States where he meets a  number of  colorful characters such as a  Californian hiker who filmed a double rainbow in Yosemite Park  that drew 44 million views. He also  encounters a  father whose quirky video of his young child acting strange under the influence of dental laughing gas garnered more than 135 million views and  earned the family more than $1 million.  But things change dramatically when Rose realizes that some of these viral successes are not by chance and that certain business interests are also at work.  He comes across ‘click farms’ – companies in Bangladesh and the Philippines which sell clicks by employing  large numbers of workers, often children, to work on  computers all day and click on websites. “Instead of the internet being the ultimate democracy that some people think it to be,  there are certain  cynical business interests at work here,” Rose concludes.  As Rose tells his story with humor and personal involvement,  his  film, tentatively titled 100 Million Views, promises to be both eye-opening and entertaining.

Documentary filmmaking is usually a long process, with filmmakers often spending several years going through the research, production and editing phases.  As many unpredictable events can happen while following a subject over a long period of time, investing in a documentary film is not without risks. One project which illustrates that  risk is Avida Livny’s film about a child pianist prodigy living in Ramallah.  For more than a year Livny has been tracking the nascent career of  14 year-old Misha-Muhammed Alsheikh whose musical talent has caught the attention of leading international musicians such as Zubin Mehta  and Daniel Barenboim. Alsheikh’s Russian mother, a piano teacher,  met his father while the latter was studying medicine in Russia and chose to live in Ramallah where Misha-Muhammed is growing up under complicated circumstances. He speaks Russian with  his mother and travels abroad with her to give concerts in Russia and other places in Europe;  he speaks Arabic with his father and with his soccer-playing friends;  and several times a week he enters yet another world as  he spends at least 3 hours travelling across the  separation barrier to Jerusalem to attend music classes. The current plan is for Misha-Muhammed to continue this routine for the next two years and then after finishing high school at an accelerated speed, to attend Daniel Barenboim’s music academy in Berlin. But what happens if things don’t turn out as planned?  What if he decides to forego a music career?  Or if his talent does not develop as many hope it will? That’s the gamble that Livny is taking as he invites co-producers to join him in filming Alsheikh over the next two years with a production budget of more than 300,000 Euros.

Some of the other projects deal with subject matter that would seem to leave less to chance, though in cases where the drama does not occur as an unfolding story there is often less suspense  – and hence less appeal. Among them:  Ben Shani’s biographical sketch of legendary painter Eli Shamir, known for his large paintings of the Jezreel Valley  and Yoav Kleinman and Ido Glass’ story of three local heroes, a Palestinian, Jordanian and Israeli who set out to be the first people to ever swim across the Dead Sea in order to draw attention to an impending  environmental catastrophe.

CoPro also includes separate pitching sessions for filmmakers creating projects involving  tv programming  for children and teens, as well as for those working in the field of what is called New Media – documentaries designed as web series for the internet or for installations at museums or other institutions.  Filmmakers at all of the CoPro sessions  are only given  a total of 15 minutes to make their pitch and handle questions and answeres from the panel, but it’s enough time to give  members of the public who wish to attend the free event  a chance to become acquainted with the filmmakers who make up the local documentary industry. It’s also an event with a theatrical atmosphere:  an opportunity to see  creative people  describe their visions  at an early stage  in the artistic process when ideas are still  raw and passions are quite strong.