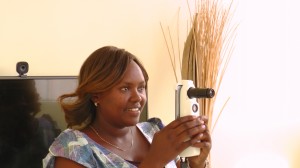 There is no word in Swahili for cervix, so when Dinah Mwangi-Azegere discusses cervical cancer with women from villages in Kenya, it takes a bit of figurative language. “‘The cooking pot where the baby bakes’ is how I sometimes describe the cervix,” says Mwangi-Azegere, Director of Field Operations for an Israeli start-up that hopes to thwart the biggest cause of death for women in the developing world.

The new technology that Mwangi-Azegere is bringing to women in Kenya and elsewhere screens for cervical cancer by combining sophisticated medical imaging with the ease of using a mobile phone.

“When I show women images of their cervix, they sometimes hug me because they are so excited about getting to know their bodies better,” Mwangi-Azegere tells The Jerusalem Report during a visit to Israel, noting that examining sessions often lead to heart-to-heart talks about women’s health issues.

MobileODT was founded in 2013 by CTO David Levitz and CEO Ariel Beery.  Levitz, an expert in biomedical optics, had been thinking for some time about combining imaging analysis with easily accessible mobile–phone technology.  In 2013, he approached Beery, a summer camp friend from the US, with the idea of forming a company around the idea.

“I had the technological innovation, Ariel had the social vision,” recalls Levitz to The Report.

At the time of their early discussions, Beery was the head of Jerusalem-headquartered PresenTense, an organization now operating in 16 cities around the world that aims to bring about social change by helping entrepreneurs with ideas that benefit communities.

Beery, 36, who has university degrees in public administration and economics, also studied Jewish philosophy at the Jewish Theological Seminary of America in New York. Both PresenTense and MobileODT, he tells The Report, reflect the vision many Jewish entrepreneurs of his generation have “to do good while doing well.”

“When I found out that cervical cancer, if caught in time, can be treated on the spot for less than the cost of treating the flu, I knew there was a huge lifesaving opportunity,” says Beery.

In classic startup style, Beery and Levitz founded the company with their own savings and built their first prototype in a makeshift workshop on the roof of Levitz’s Tel Aviv apartment. Lacking an office, they held meetings with potential investors in nearby cafes.

The lifesaving opportunity they envisioned was based on dramatically improving the accuracy and reliability of cervical cancer diagnosis in the developing world.

Countries with limited healthcare resources screen for cervical cancer in a different way than those with ready access to laboratory testing. Following World Health Organization (WHO) guidelines, health workers apply a small amount of diluted vinegar (acetic acid) to the woman’s cervix and then wait to see if the tissue turns white within a specified interval of time. However, human fallibility often results in cancer lesions being missed.

“You are depending on visual inspection by the naked eye,” notes Yael Misrahi, the company’s senior partnerships manager. “And if the nurse checks to see if the tissue changes color without waiting for the correct amount of time, the results will be inaccurate.”

Enter MobileODT, with a small portable device called EVA that can be attached to most android phones. The device, comprising a powerful light source and visual enhancement system, also has a clock that tells the examining nurse the precise time interval at which the images need to be captured. Significantly, the nurse is now able to send well-documented images to colleagues and experts for consultation.

“We aim to leverage a big market that the healthcare industry hasn’t yet figured out how to serve,” explains Beery, referring to the need for medical technologies that suit parts of the world without the healthcare resources of North America and Europe.

He points out that, until now, medical–device companies tended to design their technologies with American and European users in mind. “Recently they have come to  realize that the biggest future markets are in emerging markets,” says Beery, noting the expanding economies of African, Latin American and Asian countries.

In addition to low-cost and simple-to-use operation, MobileODT is developing technologies that use the power of the Internet to enhance product performance.

“Medical devices usually become less effective as they age, but we are developing technologies that improve over time,” says Beery. Drawing a comparison to the way the popular Waze traffic software builds on input from drivers, he notes that the more EVA is used, the more the system’s software can do. “Whenever a user consults with a peer about a diagnosis, our algorithms learn from the decision.”

The EVA device also is expected to have widespread use in the US, where FDA approval is pending, because its price and capabilities offer a competitive edge over traditional colposcopes, the imaging machines used to examine women whose lab tests show signs of cervical tissue abnormality.

“Colposcopes generally cost more than $10,000, whereas our product is priced around $1,000,” says Beery. “But even more important is that our product is integrated with smartphones and has image processing algorithms and cloud capabilities that allow clinicians to consult with other experts.”

MobileODT’s technology is expected to meet another large unmet global need: documentation of sexual assault. “Most emergency rooms don’t have a readily accessible way to gather forensic evidence, says Alon Metrikin-Gold, a partnerships manager.  “We hope to make things easier for both the victims and the examiners,” he tells The Report, noting that he has just returned from an international conference on sexual assault where the EVA was well-received.

The company’s first investor was angel investor Alyson Krause, who today serves as a director and adviser. To date, the company has raised $2.3 million in investments, and won several prestigious industry prizes including Vodafone Americas Foundation 2014 Wireless Innovation Project and the 2015 MedTech Innovator competition.

The company has already sold more than 100 units in 11 different countries and expects to break even by the end of 2016.

About 20 employees, many of them new immigrants from the US in their 20s or 30s, work in the company’s modest but colorful office space in central Tel Aviv.

On a visit to the company office, Nairobi-based Mwangi-Azegere, notes that all of the staff seem to share her high-level of motivation.

“When I first heard about MobileODT, I knew this was something I wanted to be part of,” says Mwangi-Azegere, pointing out that her mother succumbed to breast cancer after a late diagnosis.

“Every day you go to work you know you are going to save a woman’s life.”