PDF In The Heart of Africa – The Jerusalem Report – Bernard Dichek 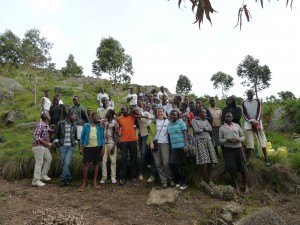 Gal Vinikov begins her day with fruit juice made from the many varieties of mangos, bananas, pineapples, passion fruit and guavas that grow in Burundi. “Then, if there is electricity I have some coffee,” says the 28-year-old Israeli, referring to the frequent power outages in the town of Makamba ‒ one of the few places in the country that actually has an electric grid.

Fortified with vitamins and maybe even caffeine, she is now ready to manage a development project in the landlocked heart of Africa that was initiated by the Israeli NGO Tevel b’Tzedek towards the end of 2014.

The project originally included a group of 15 Israelis and Jews from around the world working alongside an equal number of Burundians. All university graduates, they lived together in communal quarters and shared ideas about community development. But, after an outbreak of violence and political turmoil in Burundi that, according to Reuters, has resulted in at least 400 civilian deaths and more than 250,000 refugees fleeing the country, Tevel evacuated its overseas participants a year ago.

Vinikov arrived in October to oversee the local staff and phase out the project. She is, today, the only Israeli currently doing development work in the troubled country.

In the rural region where Vinikov works, however, there is little evidence of the political tension, she tells The Jerusalem Report. “There was a curfew a few times, but generally things remain calm,” she says, noting that the violent clashes take place mainly in the capital of Bujumbura.

“The real stress here happens during the hour and a half drive to work each morning,” she quips, referring to the journey on the unpaved, reddish clay road that winds its way through the hills from the town of Makamba, where she lives, to the village of Vuzigo where the program is being implemented. “On a good day, the driver only has to avoid goats and livestock and potholes, but, when it rains, there are often landslides.”

In Vuzigo, Vinikov and the local staff work with farmers, teachers, youth and women’s groups. “No two days are the same, something unexpected almost always happens,” says Vinikov, noting that she had just spent a day driving for eight hours to attend a funeral in the distant village of a staff member.

“His wife gave birth towards the end of her pregnancy. She must have been in her last month and the baby arrived just a few weeks early. But there are no incubators in the countryside here. There was nothing to do. The baby didn’t survive for more than a few hours,” she says, adding that the incident helps illustrate her motivation for the work she is doing.

“Back in Israel, babies are born prematurely all the time. But there are incubators everywhere and it’s more or less a routine procedure.  It’s something we take for granted. Not here.”

Vinikov points out similarities between African and Jewish funeral customs. “Everyone helped fill the grave and spread flower petals over it. Then before leaving everyone washed their hands,” she recalls. “It gave me a sense of the common humanity shared by people of all cultures.”

Vinikov originally sought a career in the Foreign Ministry, majoring in government studies at the Interdisciplinary Center Herzliya. But, after graduation, she decided she wanted to bring about change in the field rather than through politics. After participating in a post-disaster relief project in the Philippines she knew that humanitarian work was what she wanted to do.

“I started knocking on doors, but finding a job with international development agencies isn’t easy. There’s a lot of competition and it doesn’t help if you have an Israeli passport as a lot of agencies aren’t big fans of Israel,” she recalls. “My family was supportive, but a lot of people tried to convince me to give it up. I realized it’s a bit like being an artist or musician, it’s something that you love doing even if it’s going to be hard to make a living doing it.”

Vinikov, who at the age of 14 decided to leave her home in the central Israeli town of Reut, to attend the Sde Boker High School for Environmental Studies in the Negev Desert in the south, didn’t give up.  Last fall, she landed the position as Tevel’s country manager in Burundi.

“The staff in Israel who were here previously kept telling me that no matter how much they prepared me it wouldn’t be enough,” she recalls. “They were right.”

Burundi is a spectacularly green country, covered with scenic rolling hills. The pastoral scenery, dotted with brick homes laid out in clusters with courtyards, create an idyllic first impression. It was not what Vinikov expected to see when she arrived in this country of 10 million that is beset with bouts of severe hunger and ranked as one of the poorest in the world.

“Food security is an issue,” says Vinikov, citing the unreliability of local crops. “A large crop of potatoes is being harvested right now, but people are caught in a dilemma of whether to eat them all now or save some for further planting.”

Besides potatoes, the other local staples include ugali, a starchy puree made from cassava root; ringa-ranga, spinach-like green leaves; pili-pili, a spicy pepper; and beans. “A meal without beans is not considered a meal here,” Vinikov notes, adding that goat meat and beef are also sometimes affordable.

None of the homes in Vuzigo have running water or indoor toilets, and a common sight is colorfully clad women and children carrying home yellow jerry cans on their heads from a communal tap. A few homes and stores have diesel generators or solar panels that provide electricity, but most rely on candles and kerosene lanterns for night-time lighting and charcoal for cooking. Cell phones, ubiquitous in most of sub-Saharan Africa, are not very common in Vuzigo. 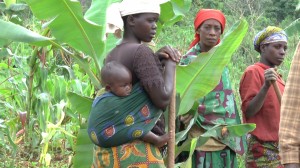 Months after her first visit to Vuzigo, Vinikov’s presence continues to draw the attention of children playing in the streets. Intrigued by the sight of someone with a pale complexion, they constantly run after her. Her visits usually begin with meeting the local Tevel-trained staff members. Among them is Joel Ninganza, who studied social sciences at the University of Burundi and has a work background in micro-finance.

Ninganza, recalling the early days of the program, points out that the team did not arrive with a pre-conceived plan. Instead, they began by meeting with people in the village to identify needs that they could work on together. “The main thing we noticed was that people in the village were working in a very scattered way,” Ninganza tells The Report. “There was little economic or social cooperative activity.”

Consequently, much of the Tevel program has focused on harnessing the power of communal organization. “We now have associations for farmers, teachers, women and youth. They all meet weekly and talk about things together,” says Ninganza, who is confident that the meetings will continue well into the future.

The Tevel team, university graduates with expertise in areas ranging from agronomy to education, were active participants in those meetings.  Some were veterans of the Tevel development program in Nepal, where the organization has worked during the past eight years, reaching more than 25,000 people.

As in Nepal, the goal of the Burundi program was to work in a village for three or four years and then to move on once the communal programs had become sustainable and self-sufficient. In Vuzigo, despite the shorter term, it is clear that changes have already taken place.

“The feedback is that crop yields have significantly improved,” reports Vinikov, pointing out that the farmers have benefitted both from working together in the field and from utilizing new farming methods. In addition, soy beans, planted for the first time during the past year, have also done quite well. “Not everyone supported the soybean idea at first,” she notes.

At their weekly meetings, members of the women’s group share ideas about topics such as nutrition as well as provide support for one another on sensitive issues, including domestic violence. “The highlight of the year was the ‘husbands event,’” says Vinikov, providing feedback about a day when the men were invited to come and see what goes on at meetings. “It’s a very patriarchal society and many of the men had their doubts about the importance of the group. But after the event, they got it.”

Working with the local youth, the Tevel team noticed a high number of girls dropping out of school because of pregnancies. But after bringing in a young person from outside the school to talk about reproductive health, the youth were more comfortable asking questions about the subject, says Vinikov, noting that there is a taboo about talking about sex in schools.

On her days off, Vinikov often travels to Bujumbura where she has become friends with a number of ex-pats working for other NGOs or at foreign embassies. On Sunday mornings, they play volleyball together at the Lake Tanganyika beach and then talk about their jobs. She has sometimes been invited to explain what she sees as the Jewish connection to working in the developing world.

“One of the beautiful things about Judaism for me is the value of looking after the ‘ger’, the stranger or foreigner who is different to you,” she explains. “As a people, we have been through a lot and now that we have a country of our own, we need to do what we can to help others.”