PDF Jerusalem Report – How Would You Like Your Grasshopper 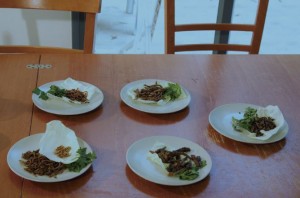 Dror Tamir likes his grasshoppers fried. “The best way to cook them is to just add salt and fry them with a bit of oil, like you were frying fish or shrimp,” says the founder of Hargol FoodTech, which has developed an innovative way to commercially raise grasshoppers.

Hargol FoodTech is one of several Israeli start-ups that have invented technologies aimed at improving the quality and quantity of food available in the developed and developing worlds.  Others include Flux, the creator of a hi-tech device for hydroponic vegetable gardens; Pimi Agro, the developer of a product that increases the shelf-life of produce; and Amaizz, which offers smallholder farmers in Africa a way to keep cassava and other crops from spoiling after they are harvested.

Dror Tamir’s interest in grasshoppers began about three years ago, when he researched alternate sources of protein as part of the program for Plate my Meal, a company he founded to combat obesity in children. When he learned that grasshoppers, which are 70% protein, offer a healthy and sustainable source of nutrition and that more than 2.5 billion people in the world were already consuming insect-based foods, he hit upon the idea of founding a company that could produce grasshoppers in an efficient way.

“In many countries where grasshoppers are eaten, they are highly valued and considered a delicacy, but because they are generally obtained by being captured in nature, the economics of production often is not very efficient,” he explains. In Uganda, he notes, grasshopper suppliers capture their prey by attracting them at night with flashlights and then trapping them in barrels. “They sell for twice the price as beef, but the growing season only lasts about six weeks a year,” he says

Tamir, however, is not targeting Africa, Central America or Asia where grasshoppers are eaten whole, but rather North America and Europe where insect-protein powder is increasingly being used in the manufacture of energy bars, protein shakes and other health foods, including new types of pasta and chips.

“Surprisingly, even some vegans are willing to indulge in grasshopper-derived foods because they are cold-blooded creatures without a developed nervous system,” observes Tamir.

He also points out that grasshoppers, like locusts, are considered, according to Jewish religious law, to be kosher. “They are Parve – considered neither dairy nor meat ‒ and Jews in both Yemen and Morocco were known to consume them.”

Hargol FoodTech’s main competitive advantage over other insect-protein producers, says Tamir, is the ability to raise grasshoppers commercially. “That’s something that the other insect-protein producers haven’t managed to do. They tend to base their products on crickets, which are an inferior source of protein, as they are comprised of less than 60% protein and are more expensive to grow.”

Working with cofounder Chanan Aviv, an expert in breeding insects, Hargol has developed a proprietary technology that enables a better grasshopper yield at a lower cost. The company has set up a grasshopper growing site in Elifelet in the Upper Galilee where  five-meter-square rooms house about 100,000 grasshoppers. The rooms offer ideal climate conditions in which grasshopper eggs are incubated over a 13-day period – unlike the  nine months they take to hatch in nature – and then harvested after a 30-day growing period. When the grasshoppers are ready to be harvested, the temperature of the facility is simply lowered, which causes them, in a painless manner, to sleep and die. They are then ground into powder, frozen and are ready to be shipped to customers.

Hargol currently raises more than  five million grasshoppers a year, but Tamir reports that the demand for the company’s product already exceeds the amount that Hargol can produce.

“We think that we are only scratching the surface of the potential market at the moment,” says Tamir, pointing out that major food manufacturers are looking for sources of protein that are less expensive and more environment-friendly than soybeans or animal-derived products. “That’s a $35 billion potential market,” says Tamir. He also points out that pet-food manufacturers are increasingly eyeing insect protein as a food source.

Hargol doesn’t currently market its product in Israel, but that may change. “We recently held a cooking event attended by some of the leading restauranteurs in Israel and they were very excited about the possibility of adding something new and tasty to their menu,” says Tamir, noting that grasshoppers served in Teriyaki sauce are a popular feature at leading restaurants in Japan.

Hargol may lead to more people becoming aware of the nutritional benefits of grasshoppers, though it is unlikely to lead many to breed them in their home gardens.

It is home gardeners, however, who are the primary market for Tel Aviv- and Dallas-based Flux which has developed the Eddy, a small device that floats in the water tank of hydroponic gardens or farms. Its sensors provide feedback to the gardeners and tips on how to nurture their crops.

The device was invented by Flux founder Karin Kloosterman, an Israeli journalist who publishes the popular environmental website Green Prophet. 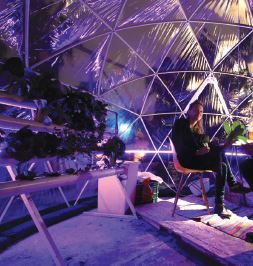 “I grew up in Canada with parents who froze and preserved food grown in season, including organic crops grown by my grandfather,” says Kloosterman, explaining her inspiration for the idea. “As a researcher and reporter, I came to realize how much conventional agriculture is harming our planet. But hydroponic farms can both feed people in the developing world and enable urban farmers to grow fresh vegetables in a sustainable way.”

Similar to the way that the well-known Waze app shares information about traffic, Eddy uses artificial intelligence, as well as information and image processing, to provide information to the individual gardener and share information among a network of users.

“Eddy examines the changing balance of chemicals in the water and provides immediate feedback about what should be done through real-time alerts sent to the user’s phone,” explains Kloosterman. “In addition, the system uses the information gathered from other users to instruct garden owners on how to grow the most suitable plants for the environmental conditions in their neighborhood.

“In commercial applications, we are striving to take this data and, ultimately, reconstruct the complex language of plants to grow them in synergy with our needs,” she adds.

Kloosterman expects amateur gardeners from all over the world to use Eddy to connect with others who already have the know-how to create bigger opportunities in food production.

“Eddy improves crops with every person added to the network,” she explains. “But maybe you aspire for bigger things like sharing your harvest in a farmers’ market? If so, Eddy will also offer an opportunity to hook up to a network of other growers and farmers.”

The Flux business model leverages a number of expanding market trends, including the legalization of cannabis in a number of American states. Cannabis is ideally suited for hydroponic production and already comprises an estimated $160 billion market in the US.  Kloosterman notes that young people are showing an increasing interest in hydroponics – but not just for growing cannabis. “Millenials are an important target market because they are driving the real-food revolution. More than half of them that own a home also start a food garden.”

Flux plans to ship Eddy to its first customers in April. The device will be marketed for $200 a unit at hydroponics shops in the US, eventually reaching large chain stores such as Costco and Target.

An Israeli-invented technology that is already having an impact on the US food market is Fresh Protect, a vegetable rinse that dramatically increases the storability and shelf life of fruits and vegetables.

“Until now, many food growers have tried to make fruits and vegetables last longer by submerging and coating them with synthetic fungicides and preservatives,” explains Nimrod Ben Yehuda, the founder and president of Pimi Agro. “These preservatives may keep away insects and prevent fungi from growing, but they often contain chemicals that are suspected of being cancerous and unhealthy to the environment.”

His company’s product, Ben Yehuda points out, is completely non-toxic and environment-friendly because it is composed of two basic ingredients ‒ hydrogen and oxygen ‒ which are easily biodegradable.

One of Pimi Agro’s first success stories was working with papaya farmers in the Hof Hacarmel region of northern Israel.

“The papayas they were growing had to reach the market within a week or they would deteriorate. But since they started rinsing their papayas with Fresh Protect they are able to keep the fruit fresh for three weeks.”

Pilot use of the company’s product, mainly on citrus fruit and potatoes, is already underway among leading US retailers such as Wal Mart. The company currently is focused on getting additional approvals from regulatory authorities in the US.

Pimi Agro already has sales of about $1 million in Israel and the US and is raising about $10m. in funding to carry out the safety trials required to get approval from the US FDA as an authorized food “sanitizer/sterilizer product.”  The company also plans to expand its activities into South America, South Africa, Spain, Turkey, Morocco, Egypt and Taiwan.

Ben Yehuda eventually hopes to bring the technology to parts of the world where, he suggests, it is needed the most. “About 70% of the produce in the developing world spoils before it can be eaten,” says Ben Yehuda. “According to the United Nations Food and Agriculture Organization, just one quarter of the food lost annually would be enough to feed the world’s hungry.”

One company already active in improving the durability of produce in the developing world is Amaizz, which has developed a portfolio of products aimed at helping farmers preserve field crops, such as corn and cassava, after they have been harvested.

“Cassava is often damaged during harvesting, which makes it spoil sooner,” says Ido Batchko, chief operating officer and co-founder of Amaizz, referring to the cassava root, a carbohydrate-rich food that is a staple part of the diet of half a billion people.

“We have developed a line of tools and machinery that will extend the post-harvest life span of the cassava root and prolong its usage,” he adds, pointing out that the Amaizz cassava kit includes three parts: an easy-to-use extraction tool; a solar-powered peeling and cutting machine; and a vacuum storage compartment.

Another Amaizz product aimed mainly at corn farmers is a crop-storage facility. The container ventilates to reduce moisture to safer levels and disinfects fungus and mold while protecting against rodents and pests.

Amaizz is partnering with major commodity and equipment companies, as well as working with international aid agencies. The company hopes to introduce its products in Malawi, Nigeria and India in the near future.

Although it has mainly been computer and medical technologies that have thrust Israeli innovation into the industrial limelight, as companies like Amaizz, Pimi Agro, Flux and Hargol spread their products around the globe, the agricultural sector is showing that it, too, is an important part of the Start-up Nation’s business scene.