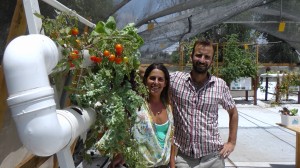 The recently held Pears Challenge competition invited Israeli entrepreneurs to leverage their entrepreneurial and innovative skills to develop technologies and services to help people in the developing world. Sponsored by the Pears Foundation, the competition culminated in Tel Aviv in June when five teams of young entrepreneurs pitched novel ideas for improving the food supply, energy sources, and healthcare for some of the world’s poorest people.

The first-place prize of $20,000 was awarded, by a panel of international experts, to a startup called LivingBox, which is developing a product of the same name that enables plant growth without soil.

“LivingBox is a sustainable system to grow vegetables at a low cost wherever you are,” co-founder Nitzan Solan explained in her presentation. The modular units she and the other founder Moti Cohen are designing use a soil-less, water-based system that can enable families, including those in the developing world suffering from malnutrition, to grow all the vegetables they need at very low cost.

The LeapFrog prize went to Keheala, a startup in the healthcare field, founded by American students Jon Rathauser and Ryan Porter at the Technion – Israel Institute of Technology in Haifa.

Their idea is based on the insight that patients being treated for diseases often don’t take medicines as directed. “In the case of tuberculosis patients in Kenya, the lack of compliance results in 3,500 needless deaths every day and huge additional expense to the healthcare system,” Rathauser said.

The Keheala innovation, he explained, incorporates behavioral economics in order to increase compliance, decrease lying and allow healthcare professionals to verify compliance remotely.  Keheala will charge a per-patient fee, yet still significantly reduce the financial costs to the government-healthcare system. The LeapFrog prize will provide Keheala with the funds needed to travel to Kenya to meet with partners and clients, as well as observe firsthand the TB situation in the area.

Because drug treatment non-compliance is a widespread problem throughout the world, Rathauser believes their innovation also may be marketed successfully to drug manufacturers for use in clinical trials.

The other three finalists included Farmvine, a cell phone-based social-network system for that is being developed by Mark Segal and Ngo Hoang Gia to provide a way for isolated  farmers in Vietnam to ask questions and share information with peers about growing specialty fruits such as pomelo. The company’s business model will allow the farmers to start out with a free six-month trial and begin to pay for the service as their profits increased. Revenue sharing with mobile-phone operators would help reduce Farmvine’s costs.

Solvesting’s slogan is “investors without borders”, which reflects the its goal of creating a portal that will provide loans from socially conscious investors to the estimated 15 million small businesses in the developing world that don’t have access to credit.

The last finalist, Ulysses, aims to help the more than half a billion people in the world who rely on mini grids from diesel or solar generators as a source of electricity. By transmitting data about inefficiencies and alerting users to alternative operators, Ulysses’s system enables optimization of energy resource usage and reduces energy costs.

LivingBox grew out of an older company known as Livingreen Urban Eco Systems, which Cohen, a marine biologist, co-founded in 2008 to meet the growing demand for hydroponic systems.

“More and more people simply want to be able to control what they eat,” he tells The Jerusalem Report, noting that hydroponics enable people to grow fresh vegetables on rooftops and in backyards without chemicals or pesticides.

Cohen, while giving a tour of the company facilities  at Beit Herut, a lushly cultivated  moshav about a half-hour drive on  the coastal road north of Tel Aviv,  says hydroponic aficionados range from commercial farmers growing  high-end leafy vegetables for export  to orthodox Jews trying to avoid the kashrut problems posed by bugs in soil-based crops. “For religiously observant Jews, hydroponics even offers a way to circumvent the shmita year (the one year in seven in which observant Jews leave the land fallow and no crops are grown),” he explains.

The idea for LivingBox, notes Cohen, goes back to work he did as a consultant for the UN and the World Health Organization on projects in Gaza and east Jerusalem, as well as in Africa and Asia.

“Working in those areas, I came across many problems that stood in the way of hydroponic systems becoming adopted even though they are badly needed,” he recalls. “There’s no standardization of equipment, so it’s often hard to find parts and equipment. Also, many systems are dependent on electricity, something that often is not available on a regular basis or at all.”

Those problems could be overcome, he reasons, if a self-contained modular unit could be mass produced at a low cost.

Solan points out that the LivingBox hydroponic system offers a long list of advantages over conventional soil-based agriculture.

“It uses only 20 percent of the water normally used and you don’t even need a source of running water as it’s possible to just trap rainwater,” she says, noting that the unit can be moved from one location to another and is not dependent on being connected to any infrastructure. “It’s completely off-grid, a simple plug-and-play system that can provide a family or community with all the vegetable nutrition it needs.”

One variation of the LivingBox includes an aquaponic system whereby fish are raised in a tank as a source of protein. “The waste generated by the fish is connected to the hydroponic system and is able to provide all the nutrients the vegetables need to grow,” she explains to The Report.

LivingBox plans to use proceeds of the Pears Challenge-prize to conduct two pilot projects in the developing world but still requires a significant investment to scale up the prototype and begin marketing.  The company views its target market as both the non-government agencies working in international development that are seeking solutions for food security, as well as those in  the developed world that want to encourage urban farming.

The basic hydroponic LivingBox unit is expected to be priced at around $200. Cohen calls the one-time investment “quite a small one” considering there are very low maintenance costs and that the LivingBox can reduce significantly the estimated $2,000 per year the average family in the developing world now spends on food.

If LivingBox is able to reach the developing world in large numbers, it could indeed have a positive impact on the more than 800 million people suffering from malnutrition worldwide.

One reason LivingBox stands a good chance of succeeding is that the company’s innovation derives from actual on-the-ground field work, notes Aliza Belman Inbal, Director of the Pears Program for Innovation and International Development at Tel Aviv University.  “They   reflect the new generation of young Israeli entrepreneurs who are coming up with ideas based on their own first-hand experiences working in the developing world.”