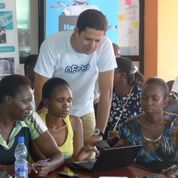 Smartphones have become so common place, that when one hears about an Israeli invention based on old-fashioned cell phones, it’s hard to get excited.

But after Dorron Mottes spends a few minutes describing his company’s technology and its partnership with Microsoft in Africa, it’s clear that the Ramat Gan-based startup has discovered a market with huge business potential. It’s also a market that is being developed in collaboration with African partners and, in doing so, stimulating a new generation of African entrepreneurs to get involved in the world of high-tech.

“We are connecting the unconnected,” says Mottes, CEO of VascoDe Technologies, explaining that by “unconnected” he is referring to people in the developing world who cannot afford smartphones, even though many people, even in the poorest villages of Africa and Asia, today have early generation cell phones.

VascoDe’s concept enables this target market of cell-phone users to “connect” both technologically and business wise.

“First of all, they can reach our internet platform, which includes email and chat, by simply dialing a four-digit number,” Mottes tells The Jerusalem Report. “But the ‘connectivity’ they gain is much more sophisticated than just regular internet use. They also are able to reach specialized information platforms such as the one we have developed for farmers in Kenya.”

The ability to reach specific market sectors is the basis for the company’s business model. In the pilot project underway in Kenya, farmers are using the VascoDe internet platform to gain agricultural updates.

“Working with Kenya’s Agrilife and a local mobile carrier, we provide weather news, crop growing tips, information about seeds and fertilizers as well as other subjects useful for farmers,” says Mottes noting that the platform is also interactive.

“Farmers can access the entire business ecosystem so that they can do things like establish a credit rating and get loans and other financial services,” Mottes adds, explaining that until now it was mainly a lack of connectivity that kept small-holder farmers in Kenya from getting bank loans.

“Kenyan farmers, for instance, may deliver their milk to a large dairy producer on a daily basis but get paid only on a monthly or longer basis. Until now, banks would have no record of their business activity, which would be crucial for providing a loan,” says Mottes, noting that the VascoDe internet platform changes that by plugging the farmers into the same informational ecosystem as the large dairy producers and financial institutions.  “The result is that farmers can establish a credit rating based on their cash flow and thereby obtain a bank loan.”

Even though a service of this kind sounds like it must cost a lot of money, Mottes points out that the user fee for farmers in Kenya amounts to a mere 25 cents a week.

“The fee has to be something that people who have very little money can afford. But because we are dealing with mass markets, we are still able to generate a profit for the mobile-phone companies and others that we partner with, as well as for ourselves.”

VascoDe already has tens of thousands of users in Kenya and is about to launch similar services in Rwanda, Uganda and Zimbabwe.

The company plans to expand to other sectors, such as health and banking, using the same pattern of partnering with a local industrial association and a mobile-phone carrier.

“Until we came along, these organizations had no way of connecting with members of their communities on a regular basis,” Mottes says.

VascoDe has caught the attention of global high-tech companies and recently began a partnership with Microsoft.

During the past summer, an innovation workshop was held in Rwanda in collaboration with kLab, a local high-tech hub. The group of about 60 included a wide variety of entrepreneurs, software developers, students, and marketers who spent two days brainstorming new ideas for apps.

“We look for ideas derived from a strong local need that have a mass market,” says Mottes. One of the proposals suggested by a young Rwandan, he relates, addresses a compelling local problem that might not have been thought of by an outsider.

“We learned that setting up an appointment with a doctor is a time-consuming process in Rwanda, as people coming from out-of-town are only able to do so when they get to the city. It may take several days to make the appointment and, in the meantime, they have to cover the costs of lodging in the city,” he says adding that VascoDe looks not only for ideas but for people with the skills to work with the company to develop a new solution.

Alex Ntale, who helped organize the workshop, tells The Report that participants gain an increased awareness of the high-tech world.

“The internet age has leveled the playing field for innovation and sparked a new breed of young entrepreneur. The Innovation Workshop got a lot of our young people thinking about how they could fit into this new world either by working with the VascoDe platform or on their own,” says Ntale, who heads the ICT Chamber of the Rwanda Private Sector Foundation.

Despite the large reach of the company’s target market, VascoDe itself remains small, with a staff of 15 who share a modest work space in the Ramat Gan Diamond Exchange area.

Although organizations that address the needs of low-income people in the developing world are often funded by donors, VascoDe is a completely private, for-profit company. When Mottes is asked if making a profit from some of the poorest people in the world is not exploitive, he replies that he believes that the opposite is true.

“Just donating money is not a way to create change,” Mottes says. “The most effective way to make a better world is to create a business that provides value for people like low-income farmers and to make sure that the business is also sustainable and drives innovation.”

At the same time, Mottes observes that “one advantage of creating a company where you do good is that you are able to attract better people to work here. Whether we are hiring programmers, advertising people or any other kind of professional, we have an edge in recruiting highly-motivated people.”

Another competitive edge VascoDe offers, suggests Mottes, is that it is comprised of Israeli problem-solvers.

“I spent a number of years working in the high-tech industry in the US, so I’m familiar with the American and European approach,” notes Mottes. “They have a certain way of doing things and expect users to follow that way. But Israelis don’t do things by the textbook. They are often more open-minded and try to create features that suit the people we are serving.”

As an example, he points out that the menus on some of VascoDe’s applications may seem, at first glance, to be more cumbersome than those you would see on similar American apps.

“Americans prefer a minimum number of clicks, but our research has found that users in some African countries actually prefer a stage-by-stage approach,” he observes.

Prior to founding VascoDe, Mottes divided his time between working in the high-tech industries in the US and Israel. He was born in New York, but as a child along with his family he immigrated and grew up in Caesarea on the Mediterranean coast. He served in the Israel Air Force and studied industrial engineering at the Technion. During the 1990s, he worked with several communications companies developing technologies for office telephone exchanges and call centers and then moved to the US where he founded a startup in partnership with two lawyers.

Known as Osmio, the company developed software, which enables businesses to easily keep track of corporate expenses. The company was eventually acquired by the largest catering firm in the world and is today doing $650 million worth of business a year. “That’s not how much we sold the company for,” he says with a smile, “but we did make a reasonable profit.”

Returning to Israel in 2010, he founded VascoDe with three partners. Initial funding of about $4 million was obtained from business angels (private investors) and the company is now trying to raise about $10 million more to expand.

The company is encouraged by the recognition it has received from Microsoft, which also has called on VascoDe to serve as consultants and mentors for other emerging high-tech companies that Microsoft is partnering with in Africa.

As promising as the African market appears to be for VascoDe, Mottes acknowledges that obstacles lie ahead.

“Things in Africa happen slowly,” he says, referring to the pace at which the company’s service can be marketed and thereby generate new revenues. “But we are growing rapidly and also plan to get into Asia and other countries in the developing world.”

One thought on “Connecting the Unconnected”