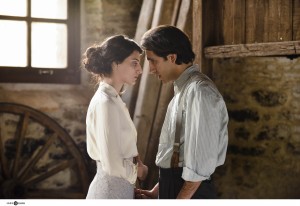 Jewish family conflicts are at the heart of two films having their Israeli premiere at this year’s Jerusalem Jewish Film Festival.

In the German comedy, Time to Say Goodbye, a father and mother are at loggerheads over whether or not to have their child circumcised; while in the Greek historic drama, Cloudy Sunday, a young Jewish woman’s love for her Christian boyfriend runs into tragic parental opposition. Also, both films derive their inspiration from filmmakers eager to use narrative film to comment on contemporary social and political issues.

The political trigger that spurred Viviane Andereggen to come up with the idea for Time to Say Goodbye  was the attempt by German politicians to ban circumcision during 2012.

“It turned into  a very heated public discussion about what the rights of children are versus respect for religious traditions,” recalls Andereggen. “I felt that comedy  would actually enable a more elevated portrayal of the issues involved than through some kind of political discourse.”

To do so,  Andereggen has created a light-hearted and very entertaining story told through the point of view of Simon,  a 12 year-old boy whose parents are divided over whether or not to have him comply with what his newly observant father deems to be an essential rite – circumcision ‒ in time for Simon‘s approaching bar-mitzva. Simon’s liberal-minded mother, however, is firmly against the idea and the fact that the two parents are embroiled in a nasty divorce further complicates things ‒ as does Simon falling head over heels in love with the family congregation’s new woman rabbi, who is 20 years his senior.

Andereggen, directing her first film, has done a good job of drawing credible performances out of 12 year-old actor Maximilian Ehrenreich and several other child actors, going through  pubescent sexual urges. She also is able to successfully convey with a deft, humorous touch, the posturing and squabbling about religious issues that frequently occur in Jewish families and communities.

“The father, in a certain sense, represents the Jewish way and the mother the German way,” says Andereggen, who points out that, in Germany, circumcision is almost never carried out among the Christian population. “I wanted people to realize that male circumcision is not something brutal that is done against children, but that is fundamental to the Muslim and Jewish religions.  Getting the audience to laugh out loud at the antics of the characters, made it easier to do that.” 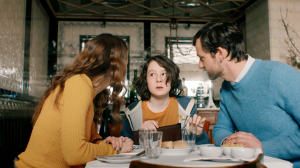 Many Germans, today, have little knowledge of Jewish culture and practices  Andereggen tells The Jerusalem Report, noting that Hamburg, where she lives and produced Time to Say Goodbye, has a very small Jewish population of fewer than 5,000 out of a general population of about two  million people. Andereggen,  31, the granddaughter of a Holocaust survivor, grew up in Hungary and Switzerland, before moving to Hamburg six years ago to study film directing.

“A lot of the time when I meet people I get the impression that I am the first Jewish person they have ever met,“ she observes.

Time to Say Goodbye has been quite well-received in Germany, Andereggen reports, in part because audiences find it refreshing to see a depiction of a Jewish topic that is not related to the Holocaust, a subject that is almost the only aspect of Jewish life that appears in German films and which has become well-entrenched in school curriculums throughout the country.

Not so in Greece. There is a paucity of awareness about the events of the Holocaust that occurred in Greece, Manoussos Manoussakis tells the Report. “Most Greeks know very little about the Holocaust as the subject is not taught in the schools,” says the director of Cloudy Sunday, the first Greek feature film to deal with the Holocaust. “Before I started doing research for this film, I myself only had a vague notion about what happened to the Jewish community in Thessaloniki.”

The German occupation of Northern Greece during the Second World War serves as the historical background for Cloudy Sunday. During the course of the war, the Germans deported the entire Sephardic Jewish community of more than 50,000 to Auschwitz.

Manoussakis points out that he felt especially motivated to make a film about the Holocaust now because of the rise of racism and neo-Nazism among political parties all over Europe, including Greece.

A veteran film director who has made several films with themes relating to the subject of intolerance, Manoussakis, 66, suggests that the reason for the omission of the Holocaust in the Greek discourse stems from a “a sense of guilt.”

The story Manoussakis tells in Cloudy Sunday does indeed include depictions of Greek collaborators, but that is only one aspect of a very nuanced and sensitive portrayal that his script provides of a large variety of characters, both Jewish and Christian, living in Thessaloniki during the German occupation that began in 1941.

The dramatic vehicle around which Manoussakis chose to frame his film is one he expected would appeal to a large Greek audience: the true story of the famous Greek musician Vasilis Tsitsanis, based on a book by Greek author George Skarbadonis. Tsitsanis was one of the most popular composers and singers of 20th century “laika” songs ‒ Greek folk music usually accompanied by the oval-shaped bouzouki instrument.

Cloudy Sunday begins with Tsitsanis managing and performing at an ouzeria, a tavern where people come to drink ouzo and listen to music. During the early days of the German occupation, Tsitsanis’s ouzeria is a bit like Sam’s bar in the legendary American film Casablanca set in Morocco during the Second World War – a meeting place for people from both sides. At Tsitsanis’s ouzeria, there are Germans and the Greek security officers aligned with them at some tables, with   underground Greek resistance fighters and Jews at others.

Tsitsanis is part of the Greek resistance, as is Giorgo, a waiter working for him who falls in love with Estrea, a young Jewish woman. As the Nazi regime intensifies its persecution of Thessaloniki’s Jewish population, forcing them to wear yellow stars, to do hard labor and confiscating their property, Tsitsanis and Giorgo are involved in resistance efforts to attack the Nazis, but are thwarted by a Greek collaborator who is married to one of Tsitsanis’s lead singers.

In the meantime, Estrea, whose father has designated a young Jewish man to be her husband, falls in love with Giorgo. The romance is bitterly opposed by Estrea’s father who is unaware of the fate awaiting the Jewish community. He also does not realize that Giorgo could save his daughter’s life.

“You are no longer my daughter,” he tells her, after she refuses to break up with Giorgo.

As the Jews are forced onto trains for what they believe are work camps in Poland, Estrea is torn between her loyalty to her family and her love for Giorgo.

Cloudy Sunday is noteworthy because of the authentic multi-faceted story it tells, showing both Greek Christians and Jews grappling with a difficult situation ‒ not always in the most heroic way.

One of the remarkable features of the film is the melancholy soundtrack. Based on original Tsitsanis compositions, the melodies have a distinctive, yet intricate, Greek sound that seems to reflect the dilemmas of the protagonists.

“Just days before the shooting began, I was in despair because, after auditioning hundreds of actresses, I still hadn’t found the right one,” recalls Manoussakis. “Then Christina, with her engulfing eyes, showed up.” 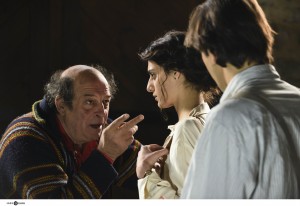 Working with veteran cinematographer Kostis Gikas, Manoussakis was able to give the film a serene visual look. “We tried to create an atmosphere of solitude,” he notes.

Cloudy Sunday includes many large crowd scenes that drew from more than 1,500 local Thessalonikians who volunteered to serve as extras. Manoussakis points out that he believes one reason he was able to get such widespread cooperation was that the locals were aware that the film dealt with German persecution. Participating in the film, he suggests, gave them an opportunity to vent their feelings.

“Many people in Greece, today, feel that they, once again, are the victims of what they consider to be German persecution,” he says, explaining that they are referring to “economic persecution.”

“Many people feel that Germans, by imposing their economic policies on Greece and other countries, are acting as though they are the new ‘rulers of Europe,’” he concludes.