“Africa is not what you think it is,” says Ruti Direktor, the curator of a new exhibit at the Tel Aviv Museum.

Certainly, anyone whose conception of Africa consists of jungle and lions, or news footage of wars and poverty, is in for a surprise when they see the offerings at “Regarding Africa: Contemporary Art and Afro-Futurism,” a large-scale panorama of thought-provoking ideas about the 800 million people who populate Sub-Saharan Africa. 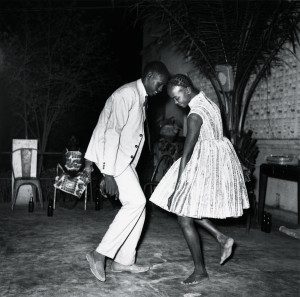 The exhibit comprises the works of 23 African artists, some of whom live in the African Diaspora, as well as those of several Israeli artists who deal with African-related themes and attempt to take a critical look at the relationships that existed between Israel and African countries during the first decades of African independence.

It also is an exhibit that its non-African curator struggled with over the several years it took her to put it all together.

“How do you talk about black art without being patronizing or politically incorrect? How can you present the varied cultures of 54 countries without overgeneralizing?” says Direktor, recalling some of the questions that kept running through her mind and almost made her give up.

Then, she came across the concept of “Afro-Futurism,” a philosophical approach to a growing work of art being created by African artists. At the core of Afro-Futurism is the idea that, in the postcolonial world, Africans are reclaiming their own forms of storytelling and distinctive way of looking at the world. The genre is distinguished by elements of fantasy, spiritualism and an emphasis on futuristic views.

“It is as though many African artists choose to skip the past and jump right into exploring the future,” explains Direktor.

By framing much of the exhibit around the theme of Afro-Futurism, Direktor does seem to have put into place a presentation that speaks with an authentic African voice.

Among the Afro-futuristic works featured, several offer contrasting views of  the continent’s future. A glimpse of utopia is provided in the works of Congolese artist Bodys Isek Kingelez. His fantasized collages of Africa, built of paper, cardboard and plastic materials integrated into various ready-made products, show cities with towers, squares, gardens, water tunnels, stadiums and stairs but no police stations, cemeteries or traffic jams – or even people.

There also is the science-fiction movie Pumzi created by Kenyan filmmaker Wanuri Kahiu, which tells the story of life on Earth in the future when water sources have dried up and people are living in underground shelters where all meager sources of water are recycled. (See sidebar) 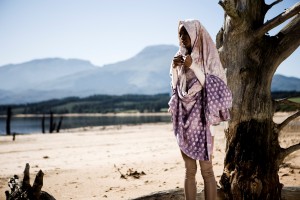 Not all of the works have Afro-futuristic motifs, but almost all offer some kind of ironic or disruptive view of conventional notions.

New York-based Kenyan artist Wangechi Mutu, for example, has created a short film rendition of the well-known Christian hymn Amazing Grace sung in her tribal language of Kikuyu that is superimposed with sensual images of a woman in a white dress wading into the ocean. Only when the accompanying text is read and it can be seen that the song was written by a repentant former British slaveowner in the 18th century does the viewer realize the significance of the body unfettered in the waters that once transported slaves.

Some of the artists in the exhibit simply dazzle by the strength of their imagination, such as the flamboyant comic-book style paintings of the Congolese artist Cheri Samba that satirize the way the commercial art world corrupts art and artists, or Okhai Ojeikere’s obsession with women’s hairstyles.

Over four decades, the Nigerian artist photographed more than a thousand different African women’s hairstyles. Shown from the back, they look like complex sculptures, defying the notion of a simplistic primitive culture.

Among the works of Israeli artists is a film by South African-born Ariel Reichman in which he returns to his native Johannesburg in a futile search for Maria, the woman who was his nanny when he was growing up in the apartheid era.

There also are the studio portraits of Abiel Amanuel, an Eritrean refugee living in Tel Aviv who has set up a photo studio in the area of the city’s old Central Bus Station.The old-fashioned, staged studio photos sent by Eritreans back to their families are showcased in the exhibit in collaboration with Canadian-Israeli artist Alicia Mersy.

The photos suggest a need that cannot be replaced by smartphone selfies. A hint about what that need is will be apparent to those familiar with the staged studio photos of Jewish refugees living in displaced persons camps in Germany after World War II that were sent to relatives abroad. In both instances, the refugees are always well-dressed and smiling with the dire circumstances of their situation completely hidden.

One of the most provocative works in the exhibit is a bizarre film trilogy created by Israeli artist Luciana Kaplun. Her film, Who is Atallah Abdul Rahman el Shaul? was inspired by the two years she spent working with children from the Sudanese and Eritrean community at the Levinsky Library in Tel Aviv.

“There was a rumor circulating in the African community that Israeli Prime Minister Benjamin Netanyahu was born in a village in Sudan,” Kaplun tells The Jerusalem Report. Kaplun followed up on the rumor and even found newspaper clippings in the Sudanese and Egyptian press indicating that Netanyahu’s family controlled Sudan’s wine industry and that Netanyahu hides the fact that he speaks fluent Arabic.

“In view of this rumor, some Sudanese wondered why Netanyahu didn’t accept them,” adds Kaplun, noting the Netanyahu-led government’s reluctance to grant refugee status to Africans fleeing war and persecution.

Argentina-born Kaplun, who immigrated to Israel 15 years ago, has made several experimental films exploring social issues. Two of them, Ella and Gilda, deal with the problems faced by Latin American workers in Israel who are employed as housemaids and cleaners. The films use a telenovela format and fictional narratives in which the Latinos play out their fantasies.

Kaplun, using the Netanyahu rumor as a narrative device, decided to apply a similar technique to raise questions about the attempts Israel made to assist the newlyindependent African countries in the 1960s and 1970s.

Shot in Lagos, Nigeria, using cast and crew members from the Nigerian film industry, the films conform to the popular style of the Nigerian cinema known as Nollywood – they are melodramas using exaggerated acting with the actors speaking pidgin English. Each starts with a prologue by a traditional Nigerian storyteller.

In the first version, the implied Netanyahu character is depicted as an albino child whose birth leads the family liquor business to fall apart and causes the family to flee Sudan. In the second, Netanyahu is the out-of-wedlock child born to an Israeli woman who serves as a teacher in Ghana and falls in love with one of her students. In the third, Netanyahu is the son of an Israeli construction engineer who wants to acquire an African sculpture and bring it back to a museum in Israel.

All three versions depict the Netanyahu family as being out of step with the local community, suggesting that the good intentions of the outsider are being misinterpreted and lead to unintended and even disastrous consequences.

“Israelis were sure that the Zionist model could be applied to Africa,” says Kaplun, adding “I not sure though what the ideal would have been.”

An indication that many of the Israeli efforts to provide assistance in the development of the social and physical infrastructures of the newly independent African countries were not in vain, however, is provided by another booth in the exhibit – an interactive database with a map of Africa showing many diverse examples of buildings, roads and enterprises built with Israeli expertise in every corner of the continent. The Israeli Planning, Architecture and Development in Africa Archive database is large, substantive and – in an unstated way ‒ quite convincing.

Another African artist who deals with the era of the 1960s and early 1970s when African countries were starting to gain their independence is Malick Sidibé.

His black-and-white photographs of young people in Mali convey a striking sense of optimism. They wear fashionable clothes and dance; they have fun hanging out at the beach; they seem to exude boundless energy. In many ways, Sidibé’s photos evoke the atmosphere of the 1973 coming-of-age Hollywood film American Graffiti in which American teenagers cruise through the endless night in convertibles.

Throughout Africa in those days there was a sense of a future of unlimited dreams and aspirations;. The English, Belgian and French colonialists were leaving, and, for the first time in centuries, Africans were on their own and controlling their own destiny.

What a great time to be alive.

Half a century later, these photos have a melancholy poignancy to them as we realize many of those dreams remain unfulfilled and the reality of Africa is quite different than what many hoped it would be.

Where will Africa be 50 years from now?

In contrast to Sidibé’s starry-eyed dreamers, the speculations offered by the Regarding Africa artists are much more nuanced and sobering.

Regarding Africa continues at the Tel Aviv Museum until May 27. 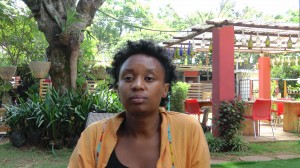 Creating for the sake of creation

Wanuri Kahiu is one of Kenya’s best known filmmakers.  Her film From a Whisper, a riveting story about a terrorist bombing that delves deeply into the psychological makeup of its characters earned five Africa Movie Academy Awards in 2009.  Speaking to The Jerusalem Report at an environment-friendly themed café in a leafy Nairobi neighborhood  that is reminiscent of some of Tel Aviv’s northern suburbs, Kahiu points out that when she made Pumzi, she had never heard of  Afro-Futurism.

“I got the idea for Pumzi while driving home from the countryside where you see women selling produce at stands on the side of the road. I wondered what it would be like if they were selling fresh air to take back with you to the city, given the state of pollution in cities around the world. So, I started to imagine a world in which you had to buy fresh air,” she recalls.

Pumzi, which means  “breath” in Swahili, tells the story of a post-apocalyptic world in which only meager supplies of water exist. People live in underground shelters, cling to every drop of water and are forbidden from going outdoors. The film’s heroine decides to defy her superiors and breaks out into the desert. Art critics have labelled it Afro-futuristic in part because it shows a world completely different than typical African stereotypes – there is no exotic green scenery or people, the heroine is not a naked jungle girl but a sophisticated scientist.

Even though the film is filled with stark images and tells a desultory story, it ends with a glimmer of hope. Because of that ending, it brings to mind the early humanistic films of the Italian filmmaker Federico Fellini: a dark story with an unexpected twist at the end that sparks faith in humanity.

Kahiu has mixed feelings about the emergence of the Afro-futuristic concept. “I applaud it and challenge it at the same time,” she says. “Applaud it because it is a way of bringing together many works that wouldn’t otherwise be discovered. But there is also this thing about being boxed.”

“In making Pumzi I just wanted to make a film about my vision of having faith in Mother Nature,” she adds, saying if she lived anywhere outside of Africa, she would not be called an Afro-futurist. “I’d just be considered an artist.”

Kahiu has come up with a concept of her own that she hopes will lead people to look at African art in a different way.

“I call it Afro-Bubblegum. The idea is that Africans can create for the sake of creation. Fun, fierce and frivolous African art that creates without an agenda. Not something we are doing in reaction to something, but creating because we are creative beings.”

Kahiu is slated to travel to Vancouver in the spring to give a TED lecture on the subject. 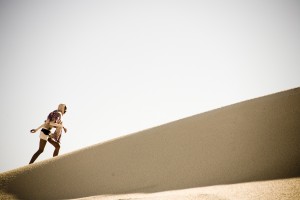