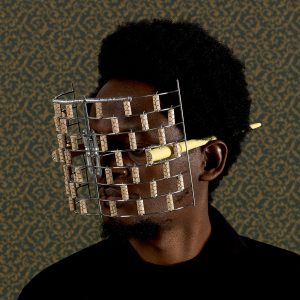 Not surprisingly the Jaffa flea market was Cyrus Kabiru’s favorite place in Israel. A rising star in the international art scene, the African artist often incorporates found objects into his art. The sprawling Jaffa market with its treasure trove of secondhand and discarded items kept him busy during the two months he spent in Israel earlier this year. Audio cassettes found there  helped express his interpretation of the Masada story in what he believes is one of his strongest works ever.

“Masada is a place with a powerful hidden story and also a place that is disappearing,” says the 35-year old Kenyan, explaining why outdated cassettes are a fitting symbol for the fading desert fortress with its concealed history.

By constructing the Masada piece in the shape of eyeglasses, Kabiru is continuing an ongoing series called C-Stunners in which he builds creatively-shaped glasses out of found objects in order to tell stories.

Using discarded electrical and computer parts, Kabiru also created glasses-shaped objects to convey his impressions of Jaffa and the Wailing Wall, which is known in Kenya as “the Famous Wall.”  A  work entitled Menora, however, follows the regular form of a Hanukah candle holder. Each branch is made out of a bent fork and a small goblet,  suggesting, says Kabiru, women carrying pots on their heads. “When I heard the (Hanuka) story of how an oil lamp was left to do all the work of giving light for many days it made me think of how women in Africa are not recognized for the hard work they do,” he explains. 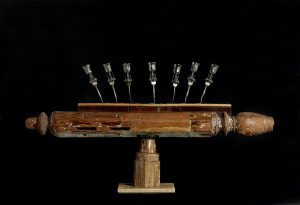 Because  of the fresh perspective that Kabiru offers, many art critics categorize his works as belonging to “ Afro-Futurism” – post-colonial art, created by African artists with their own forms of storytelling and distinctive way of looking at the world, that runs counter to stereotyped African images of jungles and poverty.

Kabiru points out that his stay in Israel also changed his stereotyped preconceptions of the country as a place of desert and war. “The vendors in the Jaffa flea market that I hung out with treated me warmly. If I didn’t show up for a day or two they were concerned about me,” he recalls.

Kabiru’s art also contradicts what many people expect art to be, explains Idit Toledano, an expert in African history and art. “In the West, what many people know about art is based on their knowledge of Western art. But to appreciate African art you have to be familiar with the culture.”

Toledano points out that Kabiru’s work is connected to his affinity for storytelling and the African talent for utilizing available materials. “Kabiru is a member of the Kikuyu people, who are known for their tradition of storytelling. Many of his works derive from stories his grandparents told him.” She notes  that his trademark glasses series owe their origins to the fact that Kabiru’s father could not afford to buy him glasses when he was young. “Consequently he decided, in his own creative way, to make his own,” she adds.

Kabiru’s works have been displayed in leading art galleries in New York and London. In addition to critical acclaim, his works have also shown steady commercial growth, with many C-Stunners purchased by art collectors at well over $10,000 each.

His art residency in Israel was part of the Africa First project founded by Tel Aviv art dealer Serge Tiroche.

“African art has been overlooked for far too long,” says Tiroche, 53, who grew up in the world of art thanks to his father, Jean Tiroche, an internationally-known Jaffa art dealer whose clientele included Jewish members of the École de Paris such as Marc Chagall, Amedeo Modigliani and Chaim Soutine.

Serge Tiroche initiated Africa First  in 2017  to give African art  more global exposure and African artists a chance to be inspired by their experiences in Israel. In addition to Kabiru, eight other Africans, including artists from Ethiopia, Zimbabwe and Togo have been invited to do residencies in Israel. 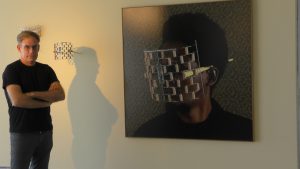 Tiroche’s own familiarity with African art grew out of an investment fund that he set up in 2011 in order to promote art from the developing world. Known as the Tiroche DeLeon Collection, the fund raised  $20 million from private investors in order to purchase 500 works of art. Most of the initial purchases were from Asia but over the years acquisitions expanded to Latin America and Africa. The fund, which aims to complete its sale of the acquired works of art by 2021,  has already sold more than 100 works at an average profit of about 50 percent.

“The fund is about more than just earning a profit,” explains Tiroche. “We also lend the works in our collection to leading museums and galleries,  giving the artists significant exposure all over the world. At the same time, the fund is a way for investors to get to know the art of the developing world.”

Kabiru’s Israel-inspired C-Stunners are currently on display at The African Studies Gallery in Tel Aviv in conjunction with an exhibit of traditional African ornamental beadworks collected and documented by Eti Dayan. An Israeli tour guide, Dayan has lived with the Maasai people in Kenya during the last twenty years. She is documenting and collecting beadworks with the goal of creating a museum that will preserve the  vanishing traditions of the peoples of Eastern Africa.

The exhibit, called Beats of Beads, is curated by Idit Toledano, who notes that it is fitting to have Dayan’s collection exhibited side-by-side with the works of Cyrus Kabiru. “He is one contemporary artist who regularly incorporates beads into his works.” 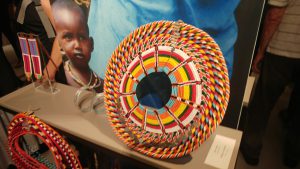