As Ahmed darted across the Sinai border into Israel, he heard bullets being fired. One struck a fellow Sudanese refugee who was captured by Egyptian soldiers. But Ahmed made it safely across to Israel.

That was six years ago, and the 30-year-old asylum-seeker has since worked in a hotel in Eilat, a supermarket in Tel Aviv and a fast-food restaurant in Holon. But, because the government has refused to grant him asylum status and he is unable to return to his native Sudan, his life has remained in limbo.

“I would be killed if I went back to Sudan,” Ahmed tells The Jerusalem Report, explaining that he fled the country after the Sudanese government sent armed militias to terrorize people in his native Darfur region. Because of his fear of the authorities, he prefers not to disclose his last name.

Ahmed’s story is typical of the approximately 40,000 African asylum seekers currently in Israel.

Yet, there is a spark of hope in his plans for the future.

Two evenings a week Ahmed studies English at The Schoolhouse, an adult education center for African migrants that currently offers English and computer classes at facilities provided by the Minshar College of Art in South Tel Aviv. The program was founded in 2012 by Sara Stern, a special education teacher who had worked with Israel’s African community for several years as a volunteer. 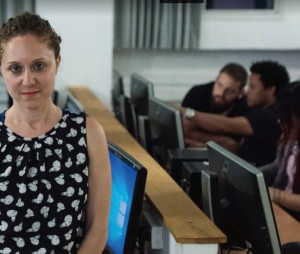 Stern decided to try to do something on behalf of the African refugees as far back as 2006 when she first learned about the Darfur refugees crossing into Israel.

“I was on vacation in Eilat, sitting by the swimming pool, when I heard on the radio that someone from my hometown of Efrat was organizing volunteers to help out the refugees,” says Stern, referring to social worker Elisheva Milekovsky who later founded the Assaf NGO, which provides social welfare services and advocacy for refugees. “Something about their plight touched me and I decided to get involved in any way that I could,” she recalls.

Stern herself knew what it was like to be an outsider. Her family immigrated to Israel from the United States when she was a teenager. “I didn’t speak out loud during the four years I was in high school, because I was embarrassed about my accent,” she recalls, noting the difficulties she experienced moving to a new country.

Even though she may not have consciously thought about it at the time, she also was well aware that members of her own family had once been refugees. “My grandparents fled to the United States from Germany in the 1930s, arriving with no money. Yet, my grandfather Gustav, who had an enterprising spirit, went on to become a successful businessman as one of the first Americans to see commercial opportunities in the pet business,” she says, but adds that her family history contrasted with her own financial security because she gratefully had parents who were able to support her university studies.

Stern, together with a few other Israelis, formed an informal network of volunteers who helped the refugees in Jerusalem by teaching them Hebrew, helping with medical assistance and advocating on their behalf when employers tried to exploit them.

“There was no government support and no NGOs in those days to give any sort of basic support to them, so we just used whatever skills we had and did whatever we could,” she says.

As the flow of refugees from war-torn Sudan and Eritrea’s brutal dictatorial regime grew, it became clear to Stern that the refugees would not be allowed to return to Africa in the foreseeable future. At the same time, the Israeli government severely restricted their economic opportunities.

“I remember sitting in a restaurant and observing an Israeli student working side by side with an African refugee. I knew that most probably for the Israeli student the job was just a stepping-stone on the way to a future career  but for the refugee there wasn’t anything that lay ahead.”

“Whenever I talked to them about what they wanted the most, I repeatedly heard them say they wanted to learn,” she continues.

She concluded that if the refugees could use their time in Israel to improve their education, it would both give them a sense of hope and enable them to contribute more to their home country of origin if and when they return.

Stern started out by working for HIAS, the American Jewish refugee agency that was originally founded to assist Jewish refugees fleeing pogroms in Eastern Europe. She spent six months travelling around the country working on a HIAS project assessing the adult education needs among the asylum seekers in Israel.

In 2011, while taking a break and travelling to Western Africa with her husband on a music project, she came up with the idea of creating something that didn’t yet exist: an adult education center for refugees.

With initial organizational support from HIAS and the NGO Windows for Peace, as well as from a small group of likeminded individuals, The Schoolhouse was born.

“We decided to concentrate on teaching transferable skills that they could take with them anywhere in the world. This is the reason we began with English and computer skills,” she explains. The Schoolhouse has also taught math and French, and provided courses in teaching skills and leadership empowerment.

Stern and her colleagues were able to cobble together a teaching staff that included both professional and volunteer educators. They chose people with expertise in teaching English as a second language who also had good interpersonal skills and a sensitivity toward other cultures.

Still, many of the teachers found that their previous approach to teaching English as a second language did not yield successful results, even though many of the students already spoke two or three languages. Developing a teaching methodology for students used to learning in informal ways, became a major focus and priority, as very little research or materials existed.

“When we tried to do exercises like ‘fill in the blanks’ or to rely on other structured methods like verb tables, we didn’t get very far,” says Zohar Friedman, Director and Pedagogical Coordinator at the Tel Aviv school.

“It took us a while to find a methodology that worked, but once we did, it was amazing to see how quickly they progressed. In fact, I was surprised to see how brave and lacking in self-consciousness many were as they just plunged right in and tried out new words and concepts,” adds Friedman, who is studying for a master’s degree at Tel Aviv University in TESOL (Teaching English to speakers of other languages).

The ability of the students to quickly grasp new words and ideas was not the only thing that surprised Friedman.

“There is a real dissonance between the horrible ordeals that they have been through in their lives and the cheerfulness and positive attitude that they bring to class,” says  Friedman, a recent new immigrant to Israel who previously studied literature and writing at Johns Hopkins University in the United States.

Today, more than 100 African refugees study at the Tel Aviv Schoolhouse. Almost all pay at least part of their tuition fees.

Stern points out that the program is also helping them strengthen their self-confidence, learn critical thinking and  how to express their opinions.

“These are attributes that help them become community leaders,” she says.

Leveraging this leadership potential is at the basis of another program being undertaken by The Schoolhouse at the Holot detention facility in the Negev.

The Holot facility was originally set up by the government in 2014 to remove the refugees from Israel’s population centers. The intent was to keep them there indefinitely while encouraging them to leave the country and at the same time deterring others from trying to come here. However, the Supreme Court ruled that it would be unlawful for the refugees to be held there for longer than a year, so some 3,000 refugees at a time, selected seemingly randomly, are incarcerated for a one-year term as if they are serving a collective jail sentence. They are allowed to leave the premises during the day but must return each evening to sleep there.

“Being isolated from society at the detention facility is a depressive tactic, so it was clear to me that if we offered an educational program this would be a productive and motivating way for them to utilize their time,” says Stern.

Because visitors are not allowed inside the facility, The Schoolhouse set up shop in nearby Nitzana at the Nitzana Education Center. That program began in 2014 along similar lines to the Tel Aviv program.

“It was obvious that we didn’t have the resources to reach large numbers of detainees, but when we realized that many of the detainees had leadership and teaching capabilities we decided to shift our focus to training a core group of detainees to become teachers themselves. It’s a sustainable system, because once they have obtained teaching skills they can teach many different things,” says Stern.

One of the main supporters of The Schoolhouse has been the United Nations Refugee Agency (UNHCR).

“The Schoolhouse is the only organization in Israel that focuses on adult education to refugees,” says Sharon Harel, the UNHCR external relations officer in Tel Aviv. She notes  that refugee children have been allowed to attend Israeli schools.

Harel, however, remains critical of the Israeli government’s attitude toward the refugees, noting that only one Sudanese refugee has ever been granted asylum status – an effort that involved a lengthy court battle. “In Europe, almost 90% percent of those seeking asylum on similar grounds are granted asylum status,” she says.

In recent years, she points out, about 13,000 African refugees have left Israel for Western countries such as Canada or Sweden that are willing to accept them or to African countries like Uganda and Rwanda, which serve as conduits for those willing to leave Israel on their own volition.

Harel is especially concerned about legislation currently making its way through the Knesset, which may enact measures that will further harden the conditions of the refugees. Those measures include forcing employers to pay a tax for employing the refugees, further limiting the refugees’ chances of finding economic sustenance.

“Aainst this backdrop, The Schoolhouse program is especially remarkable,” says Harel, noting that Schoolhouse graduates have gone on to further better themselves.

One has earned a full scholarship to study full-time at the Herzilya Interdisciplinary Center while others, including Ahmed have been accepted in international, online university courses.

“I’ve enrolled in a program that will eventually lead to a degree in human rights,” says Ahmed. “Someday, I’d like to work in that field in my country if it becomes possible for me to go back there or to do so here in Israel.”