Salad Bowl for the Desert

An Israeli start-up is enabling Beduin families, without any agricultural training, to grow their own fresh vegetables in the harsh, arid conditions of the Negev desert.

“These tomatoes have a much better fragrance and taste than the ones we buy in the market,” says Siham Abu Salame, as she opens the tent-like canvas window to a mini-greenhouse in the dusty courtyard of her home in the northern Negev town of Lakiya.  She proudly points out a dozen or so cherry tomato plants sprouting from the soil-less water container inside the  five-meter square structure known as the Living Box. On an adjacent wall outside, a small solar energy panel provides electricity to power the hydroponic pumping system.

Abu Salame, a divorced mother of six  is one of several Beduin participating in a pilot study being conducted to see if families living in low-resource environments can use the technology to achieve food security.

The Living Box is the brainchild of two young Israeli entrepreneurs, chemical engineer Nitzan Solan and marine biologist Moti Cohen, both hydroponics experts in their early thirties. Cohen, who serves as an adviser to the Food and Agriculture Organization of the United Nations (FAO), has helped the FAO develop hydroponic systems for farmers in Ghana, Ethiopia and Gaza. One of the Gaza projects, which Cohen continues to support with online advice, involves a Palestinian farmer commercially growing lettuce, tomatoes, herbs, cabbage and onions on the rooftop of the six-story apartment building in which he lives.

“Working on the Gaza project and others in Africa made me think about ways to lower the cost of hydroponic systems so  they could be readily used by individual families in the developing world,” says Cohen.

The Living Box is the result. Together with CEO Solan, Cohen, two years ago, developed a prototype for a ready-to-assemble kit that could be mass-produced, sold at a low price and easily operated by people without previous agricultural experience.

“Two of the biggest problems faced by many people in the developing world are a lack of water and a lack of arable land,” says Solan, noting that hydroponic systems require only about 20 percent of the water used in regular farming. “Our system is also compact enough to be set up on a rooftop or balcony or small yard,” she adds, saying a single Living Box can provide all the vegetables a family requires for its daily needs.

Even though the Living Box has been designed to reach some of the poorest people in the world, Cohen and Solan believe the product can be developed and sold on a profit-making basis.

“Our business model is based on selling the units to either NGOs or individual families through micro-finance programs. Once families have successfully operated a single Living Box to meet their own food needs, they will be able to purchase additional units in order to grow additional vegetables to sell in their neighborhood and generate income,” explains Cohen.

In addition to a grant from the philanthropic UK Pears Foundation, the Living Box venture has attracted seed funding of $400,000 from private investors and is currently engaged in its first round of major fund-raising.

Both Cohen and Solan are passionate advocates of hydroponic farming. Cohen has also set up Living Green, a company that promotes urban agriculture and sells a variety of hydroponic systems to individuals and businesses across Israel. In addition, Cohen has partnered with the owners of Tel Aviv’s Dizengoff Center, and set up a commercial hydroponic greenhouse on the rooftop of the iconic shopping mall. The company currently supplies salad greens to more than 20 of Tel Aviv’s leading restaurants and food stores.

“We are able to produce vegetables year-round and deliver them fresh, daily to customers located within a very short radius,” says Cohen, noting that the Dizengoff Center greenhouse currently produces more than 15,000 heads of lettuce and other greens a month.

Cohen points out that the Living Box system will also bring these advantages to users in the developing world, but says the company is aware of the need for local partners. “We realize that before introducing  a new technology in a culture different than our own, it’s important to understand the social and cultural outlook of the community involved,” he adds.

For that reason, the Beduin pilot study is being conducted in collaboration with Sidreh, a non-profit organization that aims to improve the welfare of Beduin women.

“Because we have been working with Beduin women on desert vegetable garden projects for some time, the Living Box model fit naturally into our existing program,” says Melanie Atrash, a team leader with the Sidreh organization.

She points out that about half of the Negev’s 200,000 Beduin residents live in what are known as unrecognized towns ‒ areas that are unconnected to the government water systems or electrical grid. Consequently, the living conditions in the unrecognized towns very much resemble those of the developing world.

“We didn’t think, however, that it would be a good idea to start with the communities living in the tough conditions of the unrecognized towns,” she says. “Instead, we decided to see if the new [Living Box] system would first work in recognized towns such as Lakiya where people are connected to the water and electrical infrastructures.”

If the initial pilot study succeeds in Lakiya, Atrash expects that the project will be able to expand to the outlying desert regions.

Though it is too early for Atrash to evaluate the pilot study,  she says she has been impressed with the results so far, noting that the women “gain a sense of empowerment out of being able to work independently and produce their own vegetables.”

Cohen also is pleased with the initial feedback he has received from the Beduin users.

“We believe that if we can succeed in the hot climate of the Negev desert, we will be able to bring the Living Box to communities in hot regions anywhere in the developing world,” he says. 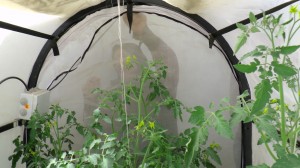