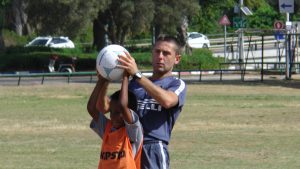 The Power of Soccer

The tantalizing idea that sports can solve the Israeli-Palestinian conflict is at the heart of the  recent (2016) Israeli feature film The 90 Minute War. Based on the satirical book by Israeli author Itay Meirson, the film depicts preparations for a 90 minute soccer match between the two sides that is going to settle the struggle once and for all. Unlike Meirson’s fictional scenario, there actually is a real-life effort underway to resolve the problems  of this region using soccer as the vehicle.

This attempt can be seen in the soccer fields of Tel Aviv’s  Florentin neighborhood, Jerusalem’s Beit Safafa and the Palestinian village of Der Istiya near Nablus. Twice a week  youngsters between the ages of 6-13, coming from Jewish, Palestinian and African asylum-seeking families attend training sessions in these districts. In contrast  to The 90 Minute War, the groups are not divided according to their nationality but play with one another in mixed teams.

They  are among the 11,000 young players learning soccer fundamentals  in a global project initiated by Italy’s famous Inter Milan professional soccer team. Known as Inter Campus, the  social action program aims to ease friction among different communities and cultures in 29 countries.

Earlier this month, Inter Campus trainer Alberto Giacomini, wearing the trademark Inter Milan away-game uniform with the Pirelli and Nike logos on it,  could be seen running up and down a Tel Aviv sports field calling out instructions in Italian. Local coaches translated his comments into Hebrew for a group of about 30 youngsters.  Giacomini, along with several colleagues comes to Israel and the Palestinian Authority twice a year to oversee the program and offer advice to local coaches. “We aren’t trying to create great players so much as we are trying to achieve educational goals,” says Giacomini, 38, who originally joined the Inter Milan organization as a right fullback with one of  Inter Milan’s semi-professional teams. Today he dedicates himself fulltime to Inter Campus. Travelling around the world to visit the different program sites, he notes that each country presents  different challenges.

“One time when a colleague and I were approaching a soccer field in the favelas (slums) of Rio de Janeiro, some local gang members didn’t recognize us and they stopped us with guns pointed at our heads,” recalls Giacomini. “Fortunately local community members were nearby and able to explain what we were doing there,” he adds.

Giacomi points out that in many of the countries where Inter Campus operates, the organization works  with local NGOs to leverage the children’s enthusiasm for soccer in order to give them incentives to cooperate in other areas.  “In Brazil and Cambodia for example, the kids must  show a slip of paper indicating that they have attended school that day. In Uganda they are required to comply with local vaccination and other healthcare conditions,” he explains.

In Israel and the Palestine Authority  participants are not obligated to fulfill any pre-requisites, yet Giacomini concedes that the local program is probably Inter Campus’  most challenging venue.   “We realize that the problem here  is much bigger than us,” he observes, referring to both to the politcal tensions. Acknowledging that Palestinian leaders do not usually allow Palestinians to engage in sports of any kind with Israelis, he feels a sense of accomplishment just in getting families from both sides to participate. “Still  it can be very frustrating and sometimes we feel that  for every two steps we take forward we end up going three steps backward,” he says, referring to games and tournaments that have been cancelled during periods of unrest.

“But I love coming here and I’m happy to see that we keep on growing and now have about 200 kids participating,” he adds. The program currently comprises about 75 Israeli and African children in Tel Aviv, 65 Israelis and Palestinians in Jerusalem and 50 Palestinians in Der Istiya. The three groups meet for training sessions in their respective cities twice a week after school. About once every two months, Inter Campus arranges transportation and security permits to bring the Palestinian participants from Der Istiya to either Jerusalem or Tel Aviv where all three groups intermingle and play together. 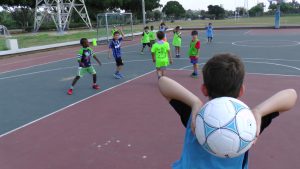 Resistance in allowing children to play can also come from the Israeli side, says Arturo Cohen, who supervises the Jerusalem program. “Not only do Israeli families have to drive their children across the city to Beit Safafa, but on top of everything else, the soccer field there is adjacent to the minaret of a mosque. So when parents arrive the first thing they often hear is the loud prayer call of the muezzin,” says Cohen.

“Also, just finding a soccer field in that part of the city where we could play wasn’t easy,” he adds.  “We kept on looking without any luck for an organization that was willing to take part  until finally Ali Ottman heard about us.” Ottman,   a retired star professional player, Inter Campus staff learned, was in charge of a soccer field in Beit Safafa. “Ali Ottman was the first Arab player to play for the Israeli national soccer team so  the idea of an integrated program really appealed to him,” explains Cohen.

Cohen, a political science student at Hebrew University who immigrated to Israel from Milan five years ago, remains enthusiastic about the program. He remembers with regret however a period several years ago, following a spate of terrorist stabbing incidents,  when a decision was made to temporarily move the program to a soccer field in the western part of Jerusalem.  “It was something I personally didn’t like to do.  I almost felt like it was our fault that we weren’t able to continue,” says Cohen.

But that  low point, adds Cohen,  soon gave way to a high point. After the Jerusalem youngsters played for about a month playing in Ramat Rachel, the Inter Campus program returned to  Beit Safafa. Then  and the staff later in the year the staff decided  to have a picnic with the families of the participants. “The best part was a soccer game with the fathers of the boys participating,” says Cohen.  “It was great to see a  mixed group of Jews and Arabs, young and old, playing and laughing together, speaking both Hebrew and Arabic, enjoying themselves thoroughly.”

Another goal of Inter Campus is to encourage girls to play soccer. About a dozen girls in both Tel Aviv and Jerusalem already participate.  In Der Istiya there currently aren’t any girl participants but that is about to change as two Palestinian women recently completed a coaches training program in Milan.

In the Tel Aviv program, a key focus has been to get the children of Israeli and African refugee families to get to know one another, says Yasha Maknouz, the director of the Israel Inter Campus program.

Maknouz, like Arturo Cohen, was part of Milan’s small Jewish  community of about 5,000, before coming to Israel. In addition to being the sales manager of a high-tech company, Maknouz is a  soccer enthusiast and social activist, who in 2002 founded a Milan NGO  called Ghetton. The volunteer organization initiated soccer matches within the Jewish community as well as  with the local Muslim and Christian  communities.

After immigrating to Israel in 2006, Maknouz decided to found an Israeli version of Ghetton, aimed at the teenage children of African asylum-seeking families. Ghetton’s project caught the attention of Inter Campus staff and in 2013 Maknouz was invited to become the Israeli director.

Maknouz points out that many of the Israeli, Palestinian and African  children in the program  had no contact with members of the other groups prior to joining Inter Campus.  “The first thing that draws them in is often just the chance to wear the Inter Milan jerseys.  Some kids tell me it’s the best gift they ever received,” says Maknouz referring to the free uniforms Inter Campus provides to participants. “Some kids  even sleep with their jerseys on. ”

Maknouz cites two factors that usually lead to the children quickly changing whatever negative preconceptions they may have of the other groups. “Once they realize that they all have the same interests whether it is a love of soccer or watching the same Lady Gaga or other songs on YouTube, it’s amazing to see how easily they become friends,” says Maknouz, 43, a father of three young children, including a 6-year-old participant in the Tel Aviv program.

“In addition, like in any other peer group, good players tend to attract friends regardless of where they come from,” adds Maknouz noting that they are eager to have their new friends be on their side in tournaments  or to sit beside them on the bus.

One of the NGOs working with Inter Campus in Tel Aviv is Elipelet, an organization that provides childcare support for asylum seeker families. “The  program also makes a difference in the way the African kids relate to one another in their own community,” says Arielle Cohen, an Elipelet staff member. “At the beginning of the season everyone was sort of in what you might call the refugee survival mode. Each kid was  just  chasing after the ball for himself. Now you can see them passing the ball back and forth and working together as a team.”

In November of 2016  the three-time European champion Inter Milan team came to Israel to play the Hapoel Be’er Sheva team. The underdog Be’er Sheva team had little experience playing with top-level European teams and was  down by two goals at half-time. Then, in the second half, the game turned into one of the most memorable soccer games in recent years as  Be’er Sheva came back with three unanswered goals, including the deciding goal in the last minute. They defeated Inter Milan 3-2.

Among the spectators cheering for Inter Milan in Be’er Sheva’s Turner Stadium were the Israeli, African and Palestinian participants in the Inter Campus program.  “But we weren’t disappointed,”  recalls Maknouz, referring to the warm way the kids from all groups sitting together related to each other that night. “The real power of soccer was there in the stands that night.”