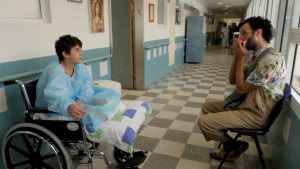 Several recent Israeli documentaries offer  in-depth perspectives into the lives of people who are often glossed over in the news media.  Among them: The Syrian Patient, a film about the wounded Syrians  being treated in Israeli hospitals and Line 881, a look at the wave of refugees absorbed by Germany in recent years.

Since the outbreak of the Syrian civil war more than 5,000 civilians wounded in the fighting  have been treated in Israeli hospitals.  This is an impressive number, representing an extraordinary humanitarian gesture  on the part of one country that remains in a state of war with the other.  But   like other statistics connected with the Syrian tragedy – more than 11 million people estimated to have been displaced and more than 400,00 killed – the numbers  themselves may not have as much impact on people as getting them to know a few of the affected individuals in an intimate way.

The Syrian Patient does exactly that. Nominated in  the Best Documentary category of this year’s  Ophir Israel Academy of Film and Television Awards, the film tells the story of several moving relationships among the Syrian patients and the Israeli staff. Most riveting is the Romeo and Juliet romance that develops between a 23 year-old Syrian patient and a 20 year-old Israeli Arab at a hospital in Israel. Badly wounded in the face and jaw from shrapnel, Majid is being treated at the Galilee Medical Center in Nahariya when he falls in love with Huda, a computer programmer at the hospital. Despite the unlikely prospects for a marriage  to take place between the citizens of warring countries,  and despite the fact that both Majid’s family in the Syrian rebel enclave of Dahara and Huda’s family in Akko oppose the romance, the two star-crossed lovers remain undeterred – for awhile.

Not only does Majid manage to capture the heart of Huda, but during the course of more than a year when he undergoes seven different operations and goes back and forth between  Israel and Syria several times, his  charismatic and sensitive personality also touches the hearts of other members of the hospital staff. One of them,  Dr. Eyal Sela,  is moved to tears when  he says goodbye to Majid for the last time. “There are moments when it is hard  to maintain the distance of the doctor-patient relationship,” he says after Majid is gone.

Filmmaker Rachel Schwarz got the idea for The Syrian Patient in 2013 while working on a film about the Galilee Medical Center. “I noticed that there were Israeli soldiers guarding a ward in the hospital and when I asked why, it took awhile for me to find out,” recalls Schwarz noting that at the time  Israel’s efforts to treat war-wounded Syrians were not being publicized .  The military protection of the ward, she adds, was a precautionary measure taken as a result of threats made  by  pro-Assad members of  the Golan Heights Druse community.

Schwarz spent more than three years following the activities of the patients treated at the Nahariya hospital, one of the main hubs of the Syrian medical assistance program initiated by the Israel Defense Forces in 2011.

“People often ask me why the army was willing to take in the wounded Syrians who show up at the border  asking for help,”  says Shwarz. “The answer I give them, which is what senior army officers have told me,  is simply that ‘if we help our enemies today then maybe tomorrow they won’t be our enemies.’”

The film also provides compelling  insights into  the Syrian conflict through  spontaneous discussions that occur among the patients and the nurses. As many of the nurses  are Israeli Arabs, they are  able to converse freely with the patients in Arabic. One mother of a  child whose legs need to be amputated, describes the pools of liquid with a chemical smell that people in her village encountered following an attack. Her account is particularly convincing because she is not speaking in response to  an inquiry by a reporter or other investigator.  She also sums up  the sense of bewilderment  that she feels when she turns to a nurse and says in in a very poignant and rhetorical  way: “Why are they are doing this to us?” 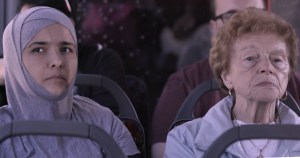 Another film which delves into the lives of people who are often only superficially viewed through the news media is Line 881,  a film about the refugees who have been absorbed into Germany in recent years.

In 2017 filmmaker Ron Goldin spent about a month and a half riding the same bus line in the  small German town of Dormagen, talking to passengers and recording his conversations.

“I got the idea for making a film based on people riding a bus from my memories of what it was like  living in Israel during the Second Intifada, “ says Goldin, referring to the period in the early 2000s when Israel faced a flurry of terrorist suicide bombings on buses. “In those days you could really feel the tension every time you got on  a bus. Everyone was very suspicious about people around them,” he recalls.

In Line  881 the atmosphere on the daily bus rides is far removed  from the extreme tension that permeated bus rides in Israel during the Second Intifada years .  In fact the most controversial moment depicted is when an  Arab woman, speaking loudly into her cell phone, is met with raised eyebrows by native-born German passengers and the bus driver. But even then  no one bothers to ask her to quieten down.

The tensions that the film does depict come from the stories that the refugees tell about the hard times they endured in their native countries and during their journey to Germany.  Those stories however, are not told by the refugees talking directly to the camera, but rather heard as voice-over, while the camera just focuses on their faces.

“That’s what the experience of a bus ride is all about,” explains Goldin. “Lots of silence. Thoughts running through people’s heads. Not much talking.”

Most of the film takes place on the bus, but the camera accompanies some of the film subjects to their homes. In one scene we see a young Iraqi man, working as a barber recounting a tearful conversation he has with his mother in Iraq who is unable to join him. “I think it may be better if we stop calling each other,” he laments.

The film also provides insight into how the refugees are viewed by native Germans. One passenger is a disgruntled German sports coach who expresses regret that his team had to give up its sports auditorium for a period of time in order to provide housing for the refugees in the days when  a large wave of them arrived.

“The local Germans are very careful in the words they choose to be ‘politically correct’ in their criticism of the refugees,” notes Goldin. “But from their body language it is clear that many of them are fearful of where the situation is headed. They are concerned about the numerous mosques springing up everywhere, the resistance of many of the Muslim refugees to adopt the European lifestyle and to cling to their traditional way of life,” sasy Goldin, adding that he was unable to interview any  female refugees because none of them could get permission from their husbands to do so.

The film also includes a portrayal of the Line 881 bus driver, a Polish immigrant, with ambivalent feelings about the refugees and her adopted country. She points out, somewhat resentfully,  that when she immigrated to Germany she did not receive any of the assistance that the government has given the refugees. She also comments that she plans to spend her retirement years in her native Poland, raising perhaps the question of whether or not today’s Middle East refugees may also someday wish to return to their native lands.

In providing insight into the lives of refugees in Germany, Goldin also suggests that Line 881 may help viewers better understand the plight of  refugees from Africa currently seeking asylum in Israel.

“There is no demographic threat here. The  numbers are simply so different, “ says Goldin, noting that  Germany has taken in more than a million people while Israel is dealing with a much smaller number. “There is no reason for our government not to treat them in a humane way and find a smart  solution to their distress.”

Line 881 was produced as a coproduction between the Film Department of the Beit Berl College of Arts where Goldin is a student, and the  Cologne International Film School.  Line 881 had (or WILL HAVE)  its premiere at this year’s DocAviv International Documentary Film Festival in Tel Aviv.